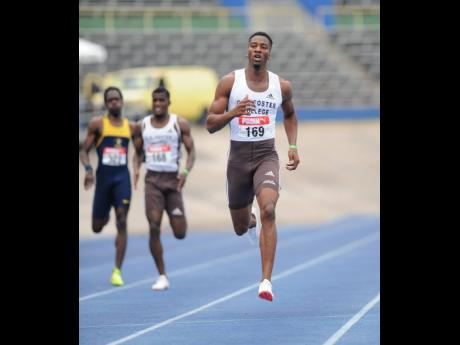 With the 2019 World Championships five and a half months away, 400-metre ace Demish Gaye has been measuring his steps. However, his speed at the Western Relays and Gibson-McCook Relays in February suggests good things lie ahead for the soft-spoken World and Commonwealth finalist.

The Sprintec Track Club member is looking forward to his next outing, which he expects to be this week at the Penn Relays in Philadelphia, Pennsylvania.

Gaye laid down a 44.90-second anchor leg at the Western Relays to help Sprintec to victory and went even faster, 44.70 seconds, a fortnight later at the Gibson-McCook Relays. That, however, ended in a loss, as schoolboy Anthony Cox produced a surprising 45.20 second finish for Racers Track Club.

As usual, Gaye relishes the ­honour of running for his country.

Peter Matthews, Gaye, Jamari Rose and Jermaine Gayle placed third in the USA vs the World 4x400m relay at Penns last year. Ironically, their time of 3:02.86 minutes was faster than the winning 2017 run, 3.03.14 minutes by Martin Manley, Leford Green, Gayle and Fitzroy Dunkley.

Gaye has his mind on the Doha horizon.

“For 2019, I’m just looking ahead, looking to do great things, see if I can chop off some time off my personal best and I’m just working hard towards that,” he explained early in April, in reference to the time of 44.55 seconds set in the 2017 IAAF World Championships.

The early indicators are promising, as in his only individual race of the season, the 2018 North American Central American and Caribbean 400m champion clocked a personal best 10.48 seconds in the 100m on March 16.

The 26-year-old Gaye is working with coach Maurice Wilson on all aspects of his race.

“This year, we need everything because of the long season,” he said of his training plan.

His exploits in 2017 and 2018 have put him on the Jamaica World Championships radar. He plans to stay there. “It feels very good, it feels very good to know I work hard, and this is where it takes me,” he said with a smile. “I’m just going to keep working harder and be greater.”

Gaye contributed to bronze medals for Jamaica in the 4x400m at the 2017 IAAF World Relays and at the Commonwealth Games, where he sped to a 44.80-second relay carry on the second leg.