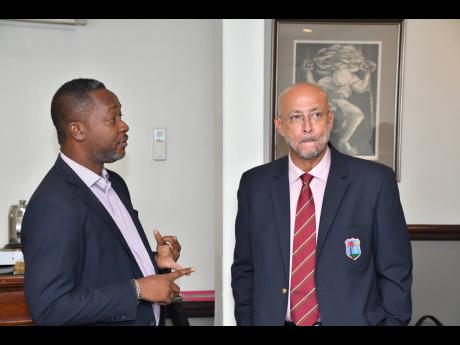 “A category Four hurricane, huffing and puffing, and unleashing powerful winds and rains across the region.”

That is an apt description of new Cricket West Indies President Ricky Skerritt, as he continues to unleash sweeping changes across West Indies cricket, leaving in his wake displaced individuals and systems that are now mere remnants of his predecessor Dave Cameron’s administration.

Skerritt is wasting no time in ringing in the changes. Out goes the recently appointed interim coach Richard Pybus, in comes Floyd Reifer. Out go long-time chief selector Courtney Browne and his panel, in come Robert Haynes, the new chief selector, and his fresh panel.

Olive branches are apparently being extended to previous prodigal sons Darren Sammy, Dwayne Bravo, Kieron Pollard, et al. Committees and subcommittees are being revamped and remodelled, as are the previously soured relationships between the board and the past Windies greats. Skerritt seems to be a man on a frantic and hurried mission.

However, the timing of these changes cannot be the best by the new president, not on the heels of the memorable Test and one-day international (ODI) series against England. The performances and the results in both of those series are arguably the best things to happen to traditional West Indies cricket for the last decade.

If the West Indies were typically annihilated and embarrassed by England and morale across the regional was at an all-time low, Skerritt’s arrival and his sweeping changes would ­probably be embraced as messianic.

Coming off the Test series victory and the tied result in the ODI series, with the players publicly expressing support for the coaching staff, and appearing to be comfortable in that space, with the entire region in an optimistic bubble, with the massive stage of the ICC World Cup on the imminent horizon, it renders the arrival and intensity of the winds of change emanating from the Hurricane Skerritt very risky, with a real potential to backfire.

Changes are absolutely necessary, but the timing of the implementation of these changes is often just as important as the changes themselves.

President Skerritt and his new administration, no doubt, have good intentions for West Indies cricket, but in terms of policy, systems and structures, they can actually do so much and no more, and neither the new administration, nor the West Indian public should lose sight of that reality. There are some powerful dynamics at play over which Skerritt, with all his moves and countermoves, has no significant control.

The elephant in the room is the fast-rising and super lucrative Twenty20 (T20) format of the game and its effect on the current and emerging generation of Caribbean cricketers. Some of the game’s biggest superstars in this format are West Indians.

In terms of the trickle down effect, the next crop of Caribbean cricket stars will be inspired and motivated by the success and the status and the millions of dollars being earned on the open T20 market by their current heroes. That dynamic will continue to place West Indies cricket firmly on the back burner for the next generation of players.

Changing the head coach, and the selectors, and inviting back some experienced players, and rekindling the relationships with past greats, and even revamping the governance structure of the board will all make good headlines in the newspapers across the region.

However, without the minds, hearts and souls, as well as the loyalty and patriotism of the players to the West Indies cause, Hurricane Skerritt might very well be huffing and puffing in vain.