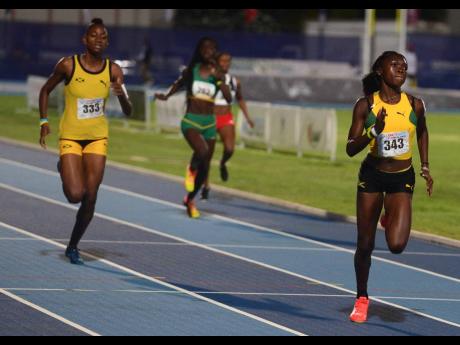 Collin Reid
Jamaica’s Shaquena Foote (right) speeds to victory in the Under-20 girls’ 400m hurdles at the Carifta Games in the Cayman Islands yesterday. Her teammate Johnelle Thomas (left) took the silver medal. 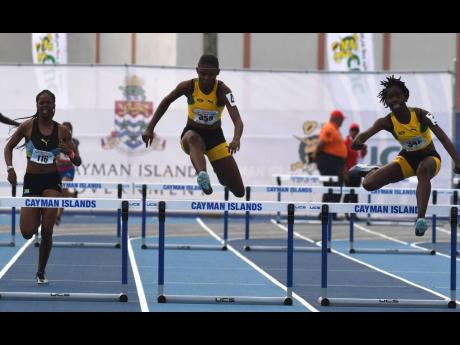 Collin Reid
Jamaica’s Sashell Reid (centre) and Quaycian Davis (right) storm by the Bahamas’ Reshae Dean on their way to gold and silver, respectively, in the girls’ Under-17 400m hurdles final at the Carifta Games, in the Cayman Islands on Sunday, April 21.
1
2

Jamaican athletes continued from where they left off on Saturday’s opening day of the 48th staging of the Carifta Games with good results yesterday. The nation’s 400m hurdlers led the way in the Cayman Islands with three wins out of four events, all three seeing one-two finishes for Jamaica.

The St Jago High School duo of Quaycian Davis and Sashell Reid got things rolling for Jamaica in the girls’ Under-17 event, as Davis won in 1:00.78 minutes, getting the better of Davis, second in 1:01.59 .

Petersfield High School’s outstanding athlete Shaquena Foote captured her second gold medal of the Games after taking the girls’ Under-20 400m hurdles in 58.05 seconds. Her teammate Johnelle Thomas clocked 58.77 seconds for the runner up spot, as Tamia Badal of Trinidad and Tobago finished third in 1:01.34 minutes.

Kingston College’s Jayden Brown continued his impressive season after winning in the boys’ Under-17 event in 54.03 seconds, as teammate Sharvis Simmonds made it another quinella for Jamaica after a second-place ­finish in 54.11 seconds.

Shamar Brown had to settle for bronze in the boys’ Under-20 event after finishing third in 52.51 seconds. Rasheeme Griffith of Barbados took gold after winning in 51.17 seconds, with bronze going to Matthew Thompson of the Bahamas in 52.23 seconds.

Jamaica had two successes in the 800m through Kimar Farquharson and Jodyann Mitchell.

Farquharson and Tyrice Taylor continued their keen battle this season in the two-lap Under-20 event in another close affair. Farquharson took the win in 1:49.65 minutes, just holding off his teammate in second in 1:59.73 minutes. St Vincent and the Grenadines’ Handel Roban took third in 1:52.22 minutes.

Jamaica had a quinella in the girls’ Under-17 event. Like she did at the ISSA/GraceKennedy Boys and Girls’ Athletics Championships last month, Mitchell pipped Kishay Rowe on the line for a close win in 2:11.92 to take gold, as Rowe had to settle for silver in 2:11.97.

After her second-place finish in the Under-20 long jump on Saturday’s opening day, Edwin Allen High School’s Lotavia Brown returned to capture the Under-20 girls’ triple jump yesterday, winning with 13.09m.

The meet will come to a close today and 24 finals are down to be contested. The morning session will start at 10, where there will be three field event finals: the men’s open pole vault, and the Triple Jump and Javelin throw for Under-20 noys.

The afternoon session will begin at 4 and will include the 4x100m and 4x400m relays in both age groups.