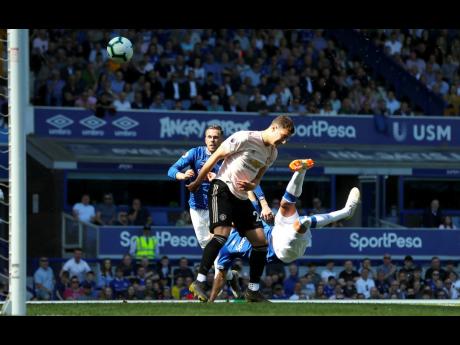 Before returning to the top of the English Premier League, Liverpool got to savour a Manchester United humiliation.

Now, unusually, Liverpool need a swift recovery by their great rivals after United’s despair at being routed 4-0 by Everton on yesterday.

Liverpool’s hopes of ending a 29-year English title drought could hinge on a big favour from sixth-place United when they host Manchester City on Wednesday.

After beating Cardiff 2-0 on Sunday, Liverpool are two points ahead of City with three games remaining. But Pep Guardiola’s champions have a game in hand over Liverpool, so defending the title is still under their control – unless they fail to beat United.

“If you are only motivated by winning the holy grail, then something is wrong with you,” Liverpool manager Jürgen Klopp said. “We enjoy the ride together with our fans.”

How his team could do with United holding City to a 0-0 draw just as it did when Liverpool visited Old Trafford in February.

“Man United was in that moment obviously in a much better moment,” Klopp said. “We’ll see what comes out on Wednesday. We have no influence on that, but we still have to play games after that.”

For Arsenal, the challenge in their remaining four matches is sealing a top-four finish to qualify for the UEFA Champions League. That mission was hampered by a 3-2 home loss to Crystal Palace that left Unai Emery’s side in fourth place, but only ahead of Chelsea on goal difference and a point behind Tottenham.

Ole Gunnar Solskjaer apologised to fans after United lost for the sixth time in eight matches in all competitions — a spell that includes the manager’s caretaker position being turned into a permanent job on a three-year contract.

Richarlison and Gylfi Sigurdsson scored before the break, and Lucas Digne and Theo Walcott added to United’s pain with further goals in the second half.

“We have got to apologise to the fans because they were absolutely fantastic and that performance is not good enough for a Man United team,” Solskjaer said. “All the way from me to the players, we know that we let the fans down, we let the club down. That performance is difficult to describe because it is so bad.

“We were beaten on all the things, all the ingredients you need, added to the talent. There is no place you can hide on the pitch.”

United are where they were when Solskjaer replaced José Mourinho in December — sixth place.

After Christian Benteke netted his first goal in 20 games in the 17th minute, Mesut Ozil did level for Arsenal at the start of the second half.

But Benteke set up Wilfried Zaha to restore Palace’s lead in the 61st before James McArthur headed in the visitors’ third.

Pierre-Emerick Aubameyang scored in the 77th but Arsenal could not find two more goals to extend their 10-match winning league run at home.

“It was very frustrating, because it was a big opportunity,” Arsenal manager Unai Emery said. “But we’ve had plenty of big opportunities before today, plenty of key moments that give us the opportunity to achieve our first target, to play in the Champions League next year.”

That could still be secured by winning the Europa League with Arsenal facing Valencia in the semi-finals.