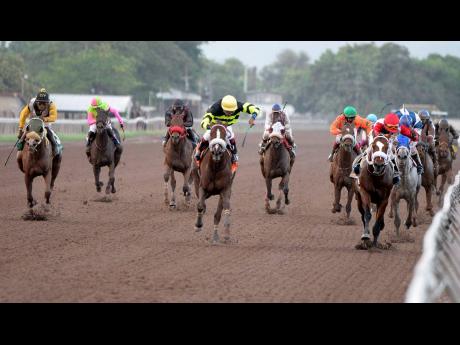 Lionel Rookwood
Hilly’s Halo (centre) gallops away from the field to win the Easter Sprint Cup over 1,100 meters at Caymanas Park yesterday.

Nunes won one race in the stewards’ room, KALAHARI awarded the eighth event after the disqualification of first-past-the-post VIRTUOSO, who swerved to her left at the start, sparking a chain reaction resulting in multiple interferences.

Nunes’ other winner, EARN YOUR STRIPES, needed no assistance from the men in suits. Fifth in the 2000 Guineas two Sundays ago, was restrained by Thomas before pouncing on AMERICAN INVADER three and a half furlongs out.

Running 16lb heavier than EARN YOUR STRIPES, United States-bred LEGALITY tried to move as a team with the local-bred but flattened out in the straight when asked to challenge by Omar Walker.

Yesterday’s holiday card closed the Easter carnival with Nunes’ stakes earnings so far almost doubling those of his closest pursuers, Gary Subratie and Wayne DaCosta, a lead which gives him his best chance ever of securing his first trainers’ title.