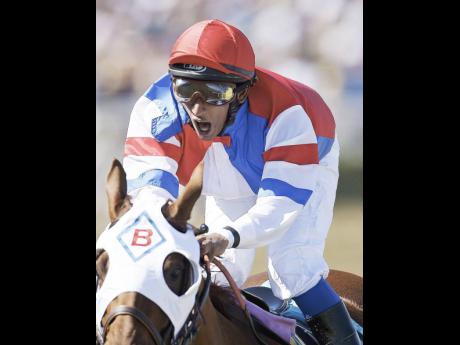 Aboard the three-year-old bay colt in the final stakes race of the spring meet here, Maragh stalked the leaders before challenging at the top of the stretch and dismissing favourite Blindwillie McTell inside the final furlong to get to the wire three-quarter lengths clear in a time of one minute, 18.29 seconds.

The win was the second in five starts for the John Terranova-trained animal but his maiden added-money success.

“Everything went well. He broke well, and I wanted him to be close, but the speed went to the front and developed in front of him,” Maragh said afterwards.

“We fell into a nice tracking trip, and every time I asked him, he kept inching closer. I felt like he was going to give me a good trip straightening up, and he powered home in the stretch.”

Going 6-1/2 furlongs on a wet track, Hushion made the early running along the rails, producing the early splits of 22.21 seconds for the quarter and 45.34 for the half, with Blindwillie McTell chasing and Captain Frost showing good speed on the outside.

Hushion and Blindwillie McTell led into the stretch, but Maragh brought Funny Guy into contention on the outside to make the race a three-horse contest.

When Hushion faded, the race became a tense duel, but Funny Guy pulled away in the final sixteenth.