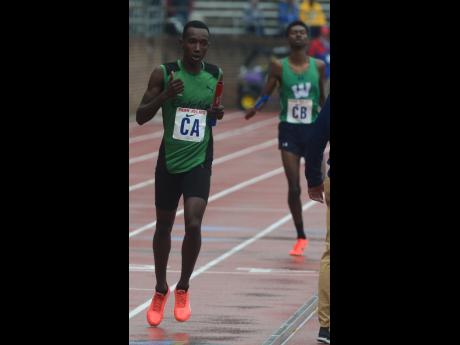 PHOTO/Collin Reid courtesy Team Jamaica Bickle, Courts ,Supreme Ventures and Guardian Life Calabar's Kevroy Venson leads his team to victory in the preliminary round of the High School Boys 800m at the Penn Relays at the University of Pennsylvania on Friday. Calabar advanced to the final as the fastest qualifiers with a time of 7:41.62.

Action has resumed at the 125th staging of the Penn Relays, after heavy rain and lightning forced a 45 minute suspension of the relay carnival at the University of Pennsylvania's Franklin Field Stadium.

The area had been hit with heavy rains and lightning all morning, forcing organisers to suspend the meet until conditions improved, with the prelims of the 4x100m for High School boys getting things back underway.

The decision to suspend competition arrived after the preliminary round of the High School Boys 4x800m, which saw three Jamaican teams in Calabar,  Kingston College and Jamaica College advancing to tomorrow's finals slated for 3:00 p.m.

Defending champions and record holders Calabar, powered by a 1:53.51 split from Kenroy Venson on his second leg run to put his team in the lead, were the fastest qualifiers, after winning their heat in 7:41.62. Daniel Cunningham, Rivaldo Marshall and Kimar Farquharson were the other members of the team.

In the clash of the colleges it was Kingston College that prevailed in 7:47.74 to be the third fastest qualifier going into the finals. Jamaica College finished second in 7:48.72 to be the fourth fastest qualifier. Bellefield, the other Jamaican team in the event, failed to advance after finishing sixth in their  heat in 8:00.79.