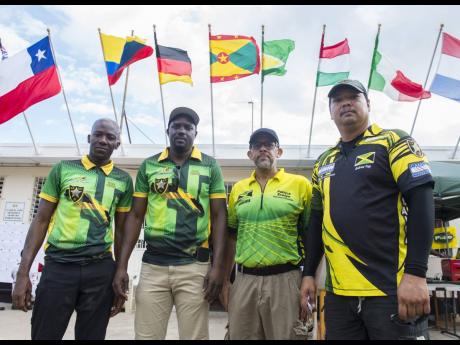 The opening day of the Jamaica International Pistol Tournament took place at the Jamaica Rifle Association base on Mountain View Avenue yesterday. Jamaica’s three competitors on the day, Yeonnie Campbell, Greg Henry, and Paul Dixon, were hoping to put themselves in a good position to finish among the medals on today’s final day.

Campbell, also a range officer, competes in the production category, and as the only production competitor on the day, ended top of the category. But she now hopes that her impressive shooting performance over the 10 stages on the day will put her in a position to finish among the top shooters at the end of the tournament.

“I have been doing okay, and I have shot up to expectation,” she told The Gleaner. “Tomorrow is the main match with the main shooters but I am happy with my achievement today, and we will see how it goes but it has been good.”

Henry, who trails Cayman’s Ales Cevela, and is followed by teammate Paul Dixon, in the limited (standard) section, added that the course was challenging and tricky, but they were looking to establish a big score that could help him or Dixon finish among the top shooters, most of whom bow into action today.

“We finished (10 stages) today, but I want to put myself in a position to win because I only compete to win,” he said. “I hope I can be in the top three, and I am pushing for that in my division. So far, my performance has been great. I just want to keep my focus and do what I have to do. The stages are good and quite deceptive, but it has been steady and really challenging.”

The highly rated Ryan Bramwell, who is competing in limited class after he broke his production gun, will have to fend off a challenge from Willy Barbage and Andy Yap for those class honours.