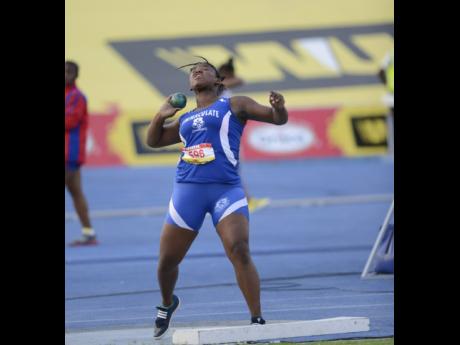 In the 40 years since the high school girls shot put was first contested at the world-renowned Penn Relays, only two Jamaican throwers had ever won the event.

That changed on Friday as Danielle Sloley of Immaculate Conception High braved cold conditions to make history for her school. Sloley says her win at Penn makes up for disappointments from earlier in the season.

A winning throw of 14.38 metres put her alongside 1984 winner Elorine Morris of Vere Technical and Nadia Alexander, who brought the title to St Hugh’s High in 2004.

Importantly, it is also the first-ever Penn title won by an Immaculate girl.

Still buzzing with excitement a day later, the Immaculate sixth-former said that she blocked out the conditions.

“The temperature was not necessarily what I’m accustomed to, but I really didn’t pay it any mind,” she explained. “It was a good environment for me, mentally and physically.”

In addition to joining Morris and Alexander in an elite club of Jamaican winners, the 2018 ISSA/GraceKennedy Boys and Girls’ Athletics Championships Class Two champion made history for Immaculate.

“I guess it’s another trophy in God’s cabinet because everything I do, I do unto God, and I’m just grateful overall that He has allowed me to reach this far,” Sloley offered humbly. “And for history making, it really hasn’t sunk it yet, but I guess one day when I think about it, I’ll be, like, ‘wow!’”

“There are a lot of disappointments this season, but I always know that whenever disappointments come along, something great is about to happen and that thing was (Friday’s win),” Sloley said, reflecting on a campaign that saw her finish second in the Class One shot put at Champs.

Additionally, she missed the Carifta Games but now it’s full speed ahead for Sloley, who is targeting a place on Jamaica’s team to the Pan-American Junior Championships in July.

The Frantz Ford-coached athlete is an inspiration to her Immaculate training partners.

“They really say that it encourages them to do whatever they’re passionate, about and that’s what I always encourage my teammates, any one of my friends, to do. Once you’re passionate about something, go after it, and go after it with 110 per cent, knowing that God will take you through it if it’s for you,” Sloley said.