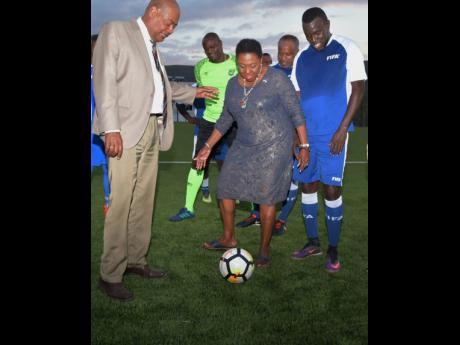 President of the Jamaica Football Federation (JFF) Michael Ricketts says he is ready, if necessary, to promote more women to leadership roles within the organisation.

This in a effort to ensure that the legacy of the historic Reggae Girlz FIFA Women’s World Cup qualification continues after their participation in the tournament this summer.

Jamaica will this year make its first appearance at the marquee event, set for France from June 7 to July 7, but there are concerns that enough is not being done to ensure that their involvement has a positive, long-term effect on women’s football in the country.

The Jamaicans are drawn in Group C with Brazil, Australia, and Italy, and Ricketts, when pressed by The Sunday Gleaner, argued that the JFF has in fact taken steps to improve the state of women’s football in Jamaica.

He noted that elevating more suitable women to leadership roles within the organisation is something that his administration is willing to rubber stamp to help encourage more females to get involved with the sport and drive it forward.

“If promoting women (in the JFF) will continue the legacy of the Reggae Girlz, then this JFF is ready to do that,” Ricketts said, before defending his administration’s approach towards and impact on improving women football in the country.

“Over the last year and a half, we have shown a great interest in women’s football. When we took office, the women’s Premier League was suspended, and we ensured that it was reorganised and restarted. We have also reorganised and restarted the parish Under-15 girls competition. We have always thought that there was a place for women’s football and nothing has changed,” Ricketts declared.

However, with just two women, Marlene Brown and Elaine Walker-Brown, serving on the JFF’s 15-member board, it is felt that a lack of reference points through the greater presence of women at that level, does not encourage involvement or facilitate growth in local women’s football.

This is not necessarily a position that Ricketts agrees with as he believes that his administration has already taken important steps to encourage the inclusion of women in administrative roles in football.

Of note, the JFF recently established an all-woman committee to generate activities to market, promote, and raise funds for the Reggae Girlz ahead of their FIFA World Cup appearance.

Jamaica gets their FIFA Women’s World Cup campaign under way against Brazil on June 9 at 8:30 a.m. They next face Italy on June 14 at 11 a.m. before closing out their group assignments against Australia on June 18 at 2 p.m.