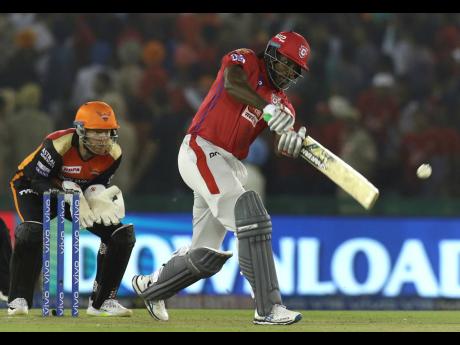 Chris Gayle suffered a rare failure while Nicholas Pooran got a start but failed to carry on as Kings XI Punjab slumped to a 45-run defeat to Sunrisers Hyderabad here yesterday.

Chasing a difficult target of 214 at the Rajiv Gandhi International Stadium, Kings XI were held to 167 for eight off their 20 overs, to suffer their seventh defeat of the Indian Premier League season and remain three from bottom of the eight-team standings on 10 points.

Pooran, a member of the Windies 15-man squad for the World Cup starting next month, looked in good nick for his 21 off 10 balls but Gayle perished early for just four.

Opener Lokesh Rahul top-scored with 79 off 56 deliveries while Mayank Agarwal chipped in with 27.

The left-handed Gayle was first to fall in the third over, brilliantly taken at cover by Manish Pandey off left-arm seamer Khaleel Ahmed (3-40) with 11 runs on the board.

Rahul then punched four fours and five sixes in a 60-run, second wicket stand with Agarwal which re-energised the run chase.

When Agarwal fell in the ninth over, Pooran arrived to punch two fours and two sixes in a 24-run third wicket stand with Rahul, which briefly threatened to upstage the hosts.

He had lashed a six and two fours off the first four balls of the 11th over from Ahmed before top-edging a hook to be taken on the ropes at long leg.

Pooran was one of three wickets to perish for 19 runs in the space of 14 balls as the run chase lost momentum.

Australian David Warner had earlier stroked a Man-of-the-Match 81 off 56 deliveries to help fire Sunrisers up to 212 for six off their 20 overs.

He put on 78 off 38 deliveries for the first wicket with Wriddhiman Saha (28) and a further 82 for the second wicket with Pandey (36).