Maragh gears up for Kentucky Derby 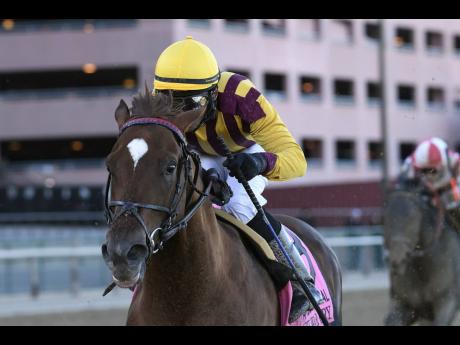 Jamaican Rajiv Maragh will carry the hopes of the Caribbean when he mounts up in Saturday’s 145th running of the prestigious Kentucky Derby.

The 33-year-old will partner with three-year-old colt Haikal, the pair attracting early odds of 30-1 for the one-and-a-quarter-mile trip at historic Churchill Downs.

Haikal, a winner of last month’s Grade 3 Gotham Stakes at Aqueduct under Maragh, is trained by Kiaran McLaughlin and owned by the deputy ruler of Dubai, Hamdan bin Rashid Al Maktoum.

For Maragh, Saturday’s outing marks his fifth chance at the famous ‘Run for the Roses’, and he said recently he hoped to break his drought.

“Obviously, the Derby is a tough race. With 20 horses, it makes it a bit challenging for everyone, but it’s the most fun you can have riding,” he said.

“All year, you look forward to having a chance to riding in the Derby, and when you make it there it’s very exciting.

“It’s very difficult to win, so it makes it more rewarding if you can, and thankfully, I’ll be there this year with Haikal.”

Maragh last rode in the Derby two years ago when he finished 10th with 6-1 choice Irish War Cry. His best outing in the Derby came in 2011 when he was third aboard Mucho Macho Man.

He will enter this year’s event with some stakes form under his belt, following his capture of the US$200,000 Red Stallion Stakes at Aqueduct with 13-1 choice Funny Guy two weeks ago.

Haikal has won twice in three starts this year, including his stakes debut last February when Maragh got him to the wire first in the US $150,000 Jimmy Winkfield. The pair finished third in the Grade 2 Wood Memorial earlier this month.

Maragh has formed a close relationship with Haikal and believes the colt is capable of making an impact in the Derby.

“When I got the mount, he came highly regarded. He finished second in that first race, and he’s also a well-bred horse, so I was very excited to ride him. He delivered with a strong late kick [in the maiden win], which was impressive,” he explained.

“I thought he ran a good race in the Wood [Memorial]. He lost nothing in defeat. It was actually a very promising run because it was his first start at two turns, and he showed that he could still be effective closing.

“He answered all the questions we had of him to give him a chance to enter the field, which I think he deserves.”