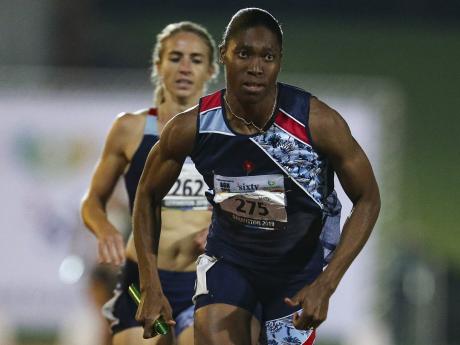 In this photo taken Saturday, April 27, 2019, South Africa's athlete Caster Semenya competes in an event at a meeting in Johannesburg. Semenya lost her Court of Arbitration for Sport appeal Wednesday, May 1, 2019, against rules designed to decrease naturally high testosterone levels in some female runners. (AP Photo/Roger Sedres)

GENEVA (AP) — The sports world’s highest court ruled Wednesday that Olympic champion Caster Semenya and other female runners like her with unusually high testosterone must take medication to reduce their levels of the male sex hormone if they want to compete in certain events — a landmark decision with far-reaching ramifications for other women’s sports.

In a 2-1 ruling, the Court of Arbitration for Sport upheld proposed rules issued by track’s governing body, the IAAF, saying that they are discriminatory but that “such discrimination is a necessary, reasonable and proportionate means” of “preserving the integrity of female athletics.”

The IAAF argued that high, naturally occurring levels of testosterone in athletes like Semenya with “intersex” characteristics that don’t conform to standard definitions of male and female give them an unfair competitive advantage, and it decreed a maximum level for females.

The court decision could open the way for similar rules in other women’s sports where size, speed and power make a difference, such as weightlifting, boxing, swimming, rugby, field hockey and soccer.

Semenya — a 28-year-old South African runner whose sculpted biceps and super-fast, blow-away-the-competition times have led others to question her accomplishments — declared she will not be deterred.

“I know that the IAAF’s regulations have always targeted me specifically,” Semenya said in a statement.

“For a decade the IAAF has tried to slow me down, but this has actually made me stronger. The decision of the CAS will not hold me back. I will once again rise above and continue to inspire young women and athletes in South Africa and around the world.”

The two-time Olympic champion in the 800 meters will have to lower her testosterone levels by such means as birth control pills if she wants to defend her world title in September in Doha, Qatar.

Semenya is expected to race in the 800 on Friday at a track meet in Doha in what will be the last world-class event before the new rules apply.