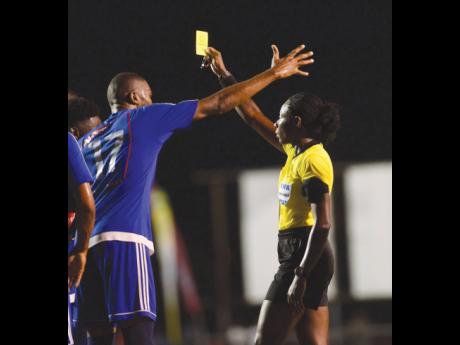 FIFA referee instructor Peter Prendergast, who is currently off the island, says that based on reports he has received on the officiating of the Red Stripe Premier League ( RSPL) final at the National Stadium on Monday between Portmore United and Waterhouse, referee Odette Hamilton could have better managed the players and the game in the hot-tempered decider.

The RSPL final, which was eventually won by Portmore United by a 1-0 margin, was marred by violence on and off the field after unruly fans, predominantly Waterhouse supporters based on reports and images, incensed by some of the calls made by the officials and fuelled by the rising tensions on the field, hurled missiles on to the playing area, with close to 10 minutes remaining in the contest.

They then invaded the zone, delaying the game for over 10 minutes, after which a fist-fight between Waterhouse’s Rafiek Thomas and Waterhouse’s Damian Williams sent the final further into disgrace.

Prendergast, who admitted that the officials got some things wrong on the night, condemned the actions of the indisciplined fans and players.

He also defended the decision to hand officiating duties to the all-female crew while underlining that the disrespectful attitudes by players and spectators towards opponents and officials are unsporting and unacceptable and does not reflect the spirit in which the game is intended to be played.

“The unacceptable behaviour of the spectators is unwarranted even if officials are not at their best on the day,” Prendergast told The Gleaner.

“We are not condoning the lack of appropriate management by the officials, and the game will be reviewed with them in order to prevent a recurrence of the below-the-expected standard of performance,” he continued.

Prendergast, however, defended Hamilton’s performance over the season and her selection to officiate the season’s final while pointing out that many of her male peers have encountered more difficulties this term.

“This season was a particularly good one for her with no major difficulties from the 12 teams,” he stated. “Males have difficulties as well. During this season, we had more game disputes with male referees than female referees.

“We must base our decision for games on performance, readiness, mental and physical, without having to consider male or female,” he reasoned.