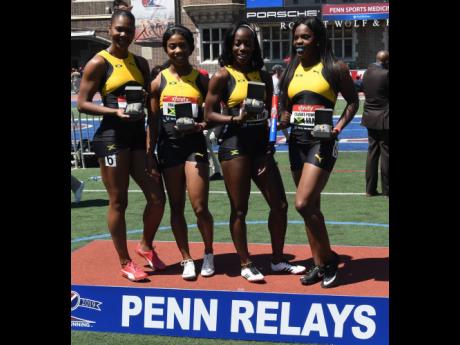 Collin Reid
Members of Jamaica’s women’s 4x100m relay team (from left) Natasha Morrison, Shelly-Ann Fraser-Pryce, Sashalee Forbes and Schillonie Calvert pose with their prizes after their win in the USA vs Rest of the World series at the Penn Relays in Pennsylvania on April 27.Collin Reid Photo courtesy of Team Jamaica Bickle, Courts, Supreme Ventures Limited and Guardian Life 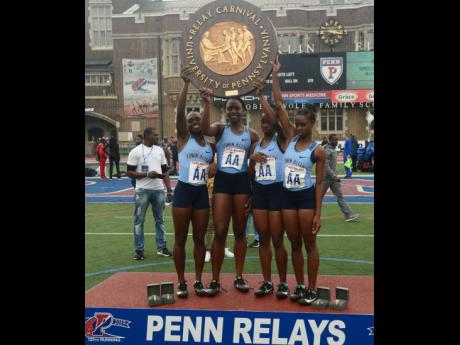 Collin Reid
Edwin Allen's 4x100m relay team (from left) of Serena Cole, Kevona Davis, Tina Clayton and Tia Clayton celebrate their victory, clocked in a record time of 43.62 seconds, at the Penn Relays at the Franklin Field in Philadelphia, Pennsylvania on April 26, 2019.
1
2

Two things jump off the page when you scan the results of last weekend’s Penn Relays. One of them is the stunning performance by Edwin Allen High School. Under the direction of coach Michael Dyke, Serena Cole, Kevona Davis, Tina Clayton and Tia Clayton destroyed the Penn and world high school 4x100-metre record with a phenomenal time of 43.62 seconds.

It was no surprise. In February, a Class Two team of Brandy Hall, Davis, Salecia Myles and Bethany Bridge zoomed at the Western Relays in 43.94 seconds. In March, Britney Johnson, Tina, Cole and Tia lowered the ISSA/GraceKennedy Boys and Girls’ Athletics Championships Class Three record to 44.25 seconds. Despite that common knowledge, the 43.62 shook Franklin Field, the University of Pennsylvania stadium that hosts the 125-year-old relay carnival.

Edwin Allen’s speed underscores a potentially bright future for Jamaica in women’s sprinting. Historically, our female speedsters are durable so 2016 100m and 200m Olympic champion Elaine Thompson, not yet 27, could be still be fast when the 2024 Games roll around. At the same time, Davis and double World Under-20 champion Briana Williams are both just 17, and there are several substantial prospects between Thompson and Williams and Davis.

Whyte and Smith ran their best times last year at 11.04 and 11.07 seconds, respectively.

Add bright junior prospects Kiara Grant and Ashanti Moore and it’s clear that Jamaica will be well stocked with speed for years to come.

The long Penn weekend saw 18 Jamaican wins liberally spread from track to field, from sprints to jumps to throws, with Immaculate Conception High School ace Danielle Sloley blasting to a shot put win. In all of that, the most impressive thing other than the speed of Edwin Allen was the presence of multiple Jamaica teams in the USA versus the World men’s 4x100m and women’s 4x400m relays.

The Americans have been running Red and Blue teams there since the USA versus the World series began in 2000 and giving more of their sprinters race relay practice, while Jamaica entered just one team per event. The Jamaica Athletics Administrative Association is to be commended for giving more of our baton bearers that same chance.

A sparkling Fraser-Pryce, Morrison, Sashalee Forbes and Schillonie Calvert-Powell combined as the Gold team to win the 4x100m in 43.19 seconds. In the 4x400m, the Gold and Green teams went one-two. In all fairness, the female US 4x400m teams were modest, but the Gold quartet of Shericka Jackson, Janieve Russell, Christine Day and Stephenie McPherson is near on the best team from this land of wood and water.

On recent form, only Commonwealth 400-metre runner-up Anastasia Le-Roy would add speed to that line-up, and she was on the Green team at Penn.

Given that relay camps aren’t part of the DNA of Jamaican track and field, it’s great to see the expanded use of Penn to blend our relay teams. Word of a search for similar opportunities is a bonus that will pay dividends in Doha, when the relays begin at the World Championships.