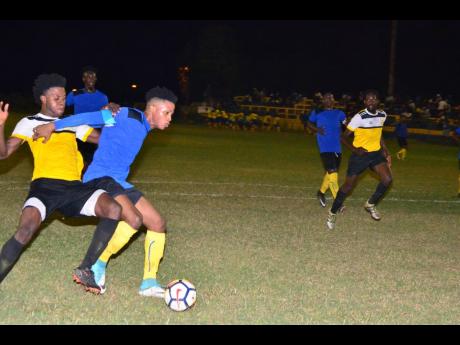 Meadforest FC head coach Karume Huie wants his charges to be bold and expressive when they go up against Molynes United FC in their Magnum JN KSAFA Super League semi-final at Constant Spring today at 8:30 p.m.

The match is the feature encounter of a night-time double-header that brings together Liguanea United FC and Olympic Gardens FC in the Magnum KSAFA Major League semi-final, which is set to kick off at 6 p.m.

The winners of each game will advance to play the winners of the other semi-finals, which will be played on Sunday, for a spot in the final, which will take place on Friday, May 10, at Constant Spring.

Keen on grabbing one of those spots, Meadforest, who finished as runners-up in the Major League last year, have done well since promotion and knocked off one of the most impressive first-round teams in the semi-finals, Central Kingston FC, by a 2-1 margin last Saturday night.

Huie’s team grabbed a 2-0 first-half lead in that quarter-final contest and showed strong self-belief, despite conceding an early second-half goal, to play strong and win. In a foreword to the semis, Huie said they need to be just as expressive.

“I know we have to do due diligence and give my respects to that team and look at the pros and cons and see where we can take advantage, and where we have advantage, we have to make sure to neutralise that,” reasoned Huie.

Continuing, he noted: “I said to them, ‘You can win’. I’ve been in this league for six years. I’ve been to two finals, and I’ve been to three semi-finals. Respect to Browns Town, respect to Mountain View; those teams have quality. I think this team’s at that level, but I’m fighting against making them understand that you have to have that belief. Don’t put yourself in a category to say you’re going to come next year and try win it. Life is not about next year. Life is about now.”

In their last match-up, Molynes United battled from two goals down to secure a 2-2 tie with late goals from regular goal-getter Tyreek Sutherland and Ronald Smith. Both players will feature among Molynes United FC’s hopefuls as they seek to make a better start and claim a space in next week’s final.

For Meadforest FC, it was Ian Davis and Earlando Ellis who gave them the early advantage and if they manage to secure an early lead today, they will be looking to keep that position to the end.

For the Magnum KSAFA semis, Liguanea United, based on their form all season, are favoured to get the better of a tough Olympic Gardens FC team.