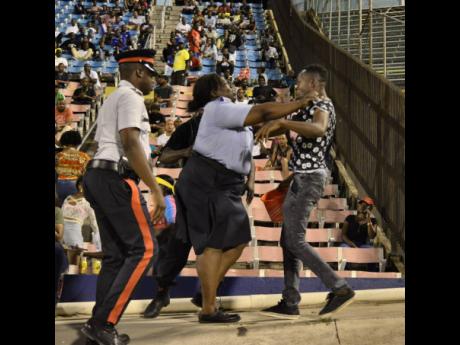 Kenyon W Hemans K
Police personnel try to prevent a man from entering the grandstand at the National Stadium after unruly supporters started to throw missiles on to the field of play during the Red Stripe Premier League final between Waterhouse and Portmore on Monday.

I watched with eyes and mouth wide open on Monday night as the Red Stripe Premier League (RSPL) final played out on TV like a bout of WWE Monday Night Raw. And I now watch as condemnation is rightly levelled at Waterhouse’s fan base. The Premier League Clubs Association (PLCA), as the planning body for the RSPL, and the Jamaica Football Federation (JFF), as the custodians of local football, also have to take ultimate responsibility for what happens at a neutral venue in Jamaica’s top flight football.

First, let me address the Waterhouse supporters, whose disgraceful display has been so unacceptable for years that I have developed sort of a love/hate affair with them fan base. On the one hand, they are what’s right about Jamaica’s football fans. They possess passion and pride that span generations that swear lifelong allegiance to the club and community. They cheer loudly, fill the stands weekly, and even have a mascot, otherwise unseen in local football. They support the stakeholders in achieving their desired targets with match attendance, gate receipts and beer sales, while generating excitement within the stands and for the TV audience. They are mostly a dream that Portmore United and other less supported but more successful clubs probably wish they had. But the thing with fan bases like Waterhouse’s is, they can also become a nightmare.

Waterhouse fans present issues, in that their often-rabid display, antisocial behaviour, and abusive vitriol to anyone within earshot make wherever they are hostile environment. This may limit the PLCA’s ability to attract new fans to the stands. Some families may see the RSPL as an unfavourable environment not conducive for children. Rabid football fans often take matches into their own hands when activities on the pitch are not to their liking, and so it is ultimately the responsibility of the governing body to ensure that whatever happens doesn’t mar the beautiful game.

It is my view that the PLCA and the JFF should have reasonably expected much of what occurred on Monday should things not have gone the way of Waterhouse during the football match, especially given the typical disposition of the Waterhouse supporters. This encounter had tension written all over it from the opening whistle.

Waterhouse were in their third RSPL final in five years and were hungry for victory, having not tasted glory since 2006. Shavar Thomas’ steely, compact Portmore United had become the thorn that consistently denied them victory. They bitterly lost to Portmore in a penalty shoot-out in 2018. They drew twice at Drewsland Stadium during the season. They met yet again for a third time in March and were unable to hit the back of the net. Portmore repeatedly frustrated Waterhouse all season.

On Saturday, I watched Aston Villa vs Leeds United in the English Football League, and a huge fight ensued on the pitch as Leeds United were given a goal on the run of play. The match descended into chaos, and the referee retreated to his colleagues for advice. It was ugly, but it wasn’t uncommon.

Less uncommon is fans getting so abusive, it stops the game. This is where I turn the spotlight on the governing bodies that are ultimately responsible for what happens off the football pitch.

In the future, the JFF and the PLCA need to implement measures to ensure that no bottles or weapons enter the National Stadium and that illegal vending is actively prohibited. The constant instances of abuse meted out to match officials need to be properly addressed right across the season. There needs to be a comprehensive code of conduct for supporters and clubs, with enforceable penalties. Implement bans for clubs and spectators who take the game into their own hands. And last, but never least, adequate security is vital at high-stakes matches to ensure that the atmosphere is maintained. We are home to the Caribbean Club Championships and the Gold Cup in May and June. The onus is always at the top. Let’s get it right, JFF, for the sake of our football! One love.