Test boost for Windies ahead of World Cup 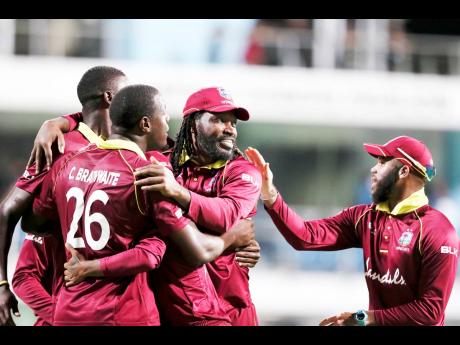 West Indies have been handed a pleasant rankings boost ahead of the World Cup after overhauling Sri Lanka to climb to eighth in the ICC One-Day International charts yesterday.

The Caribbean side gained four ratings points to move to 80 while Sri Lanka remained stagnant on 76 following the annual update, which saw the removal of the 2015-16 results and those between 2016-18 computed at 50 per cent.

For the Windies, the rise comes on the back of their outstanding performance in the recent five-match series against World No. 1s England, when they snatched a 2-2 tie.

That series result saw them draw level on 76 points with the Sri Lankans last March but remaining in ninth spot. They can further solidify their new ranking when they face hosts Ireland and Bangladesh in the Tri-Nation Series in Dublin starting on Sunday.

Poor results here, however, especially against seventh-placed Bangladesh, could see the Windies slip to ninth again heading into the World Cup, which runs from May 30 to July 14.

West Indies have spent recent years languishing at No. 9, and it resulted in them missing out on automatic qualification for the World Cup.

England, meanwhile, remain the top-ranked side but will need to beat Ireland and Pakistan in their upcoming series in order to enter the World Cup at the summit.

India are second after gaining one ratings point, while South Africa have overtaken New Zealand to claim third place, with the Black Caps dropping to fourth.

In the Test rankings, West Indies are now on the heels of seventh-placed Pakistan after gaining five points following the annual update.

The Jason Holder-led unit, who stunned England 2-1 in the recent three-Test series in the Caribbean, are now on 82 points but only two behind seventh-placed Pakistan, who dropped four ratings points.

India sit on top the rankings with 113 points but lost three ratings points to see their gap on second-placed New Zealand shrink to two points after the Black Caps gained three points.