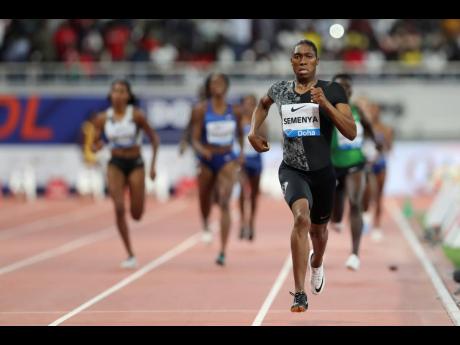 I have long argued that the Caster Semenya versus IAAF case would be a landmark decision with far-reaching and long-lasting implications for athletics and sports in general. So far, the Court of Arbitration for Sport (CAS) has presented its ruling in a summary supporting the IAAF Eligibility for Female Classification (Athletes with Differences of Sex Development(DSD)) rule, which was challenged by Semenya.

The rule is an adjustment to IAAF “Competition Rule 141 to address the eligibility of athletes with differences of sex development (DSD) to compete in the female category of competition in certain track events”. The ruling by the CAS in favour of the IAAF has left the sporting world predictably divided. In fact, a decision either way would have created the same level of panic, anger, and discord.

Let me start, however, by clearing up some misconceptions about the rule.

The rule only applies to athletes with 46 XY (chromosome) DSD who have natural testosterone levels of above 5nmol/L (unit of measuring hormones) and are androgen sensitive.

It does not apply to female athletes with XX chromosomes nor does it target females with PCOS (polycystic ovary syndrome), who may have elevated levels of testosterone.

It only applies to those females with 46 XY DSD who want to compete in distances from 400m up to one mile in international competitions.

This clarification is needed because most elite females have a range of 0.12 and 1.79 nmol/L in the blood, with males around 7.7 to 29.4 nmol/L. XY athletes with DSD can enter the range of most males. So I understand the challenges facing the IAAF as it tries to find ways to ensure ‘fairness’, with no athlete having any distinct advantage over the other in the protected category called ‘female’. However, I do not support the rule for the following reasons.

Firstly, the eligibility rule is discriminatory and should not be implemented. While I understand the conundrum the IAAF is in, I think the solution put forward targets Semenya and other black women in middle-distance events; and unlike what the IAAF wants us to believe, does not create fairness.

While the CAS has found that the rules are prima facie (accepted as correct until proved otherwise) discriminatory, they argue that it is valid because of “necessary, reasonable and proportionate means of attaining a legitimate objective”. Simply put, they believe that rules to protect any subset or category would have to be discriminatory. I believe, though, that in this case, the discrimination then makes the rule problematic. It is also targeting Semenya based on performance.

Secondly, track and field, like many sports, has created binary categories of male and female, with the latter being a protected category. The intention is to ensure that everyone in that category is on the same level. Therefore, there is no need at this point to discuss disadvantages in males. Importantly, the IAAF says it is not trying to argue definition of sex and gender, although I suppose that is really what they want to do but are afraid to.

The IAAF puts forward that the issue is not Semenya’s sex or gender identity, but rather, performance – that she has a greater advantage in the female category – and to correct that, she needs to alter her natural hormone levels.

Interestingly, at present, Semenya would be able to run as a male in that category today, and six months later, by reducing her testosterone levels to those accepted by IAAF (with hormone therapy) be able to compete in the female category.

She could also compete currently in 100m, 200m, discus, shot put, javelin or ANY other non-restricted event as a female. As crazy as that sounds, that is the issue we currently face. So the rule is not trying to create a distinction between male and female, but rather, saying that if you wish to compete in certain events as a female, you need to alter your natural testosterone levels, which is problematic.

While the CAS panel concluded that the DSD regulations are “reasonable and proportional”, it questioned the applicability of the rules. The CAS, like me, questioned the reasoning of adding the 1500m to one mile to the list of restricted events. The arbitrators noted the “paucity of evidence to justify the inclusion of the one mile and 1500m”, yet these were included in the regulations. There is no mention of the javelin throw, even though it has been recommended that this be included. This is the main reason we cannot overlook the discriminatory nature of the rule because it seems to be targeting certain athletes.

There is no easy way to look at this issue. Its complexity makes it even harder to come to an amicable conclusion. Once we place athletes in binary categories, we will continue to face these issues.

Next week, I’ll examine the implications for athletes with DSD and issues in implementing this rule.