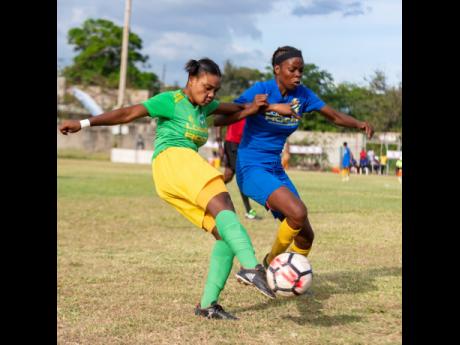 The champions came back from an early goal conceded to Notoya Atkinson, who put the underdogs in front in the 15th minute. However, winning coach Xavier Gilbert said he never had any doubts his team would get back into the game despite the early setback.

“I didn’t like the way we played today, but credit to Denham Town, they were spirited,” he said. “I didn’t have any doubts we would come back into the game, and we fought hard, came back, and won comfortably.”

Excelsior tried to control the game but were met by a lively Denham Town unit who stole the lead when Suen Gregory weaved her way past two defenders and slipped a sublime ball to Atkinson who calmly slipped the ball home. But Excelsior were level after 28 minutes when Moesha McLaughlin capitalised on a poor clearance to volley home from 25 yards.

Two minutes later, Chavelle Henry fired home from 12 yards to give Excelsior a 2-1 lead at the break. Then with the wind knocked out of their opponents, Christina Salmon rifled home the first of her two goals four minutes into the second half to make it 3-1.

She then sealed the win on 53 minutes with another powerful shot from the edge of the box.

Denham Town coach Kimathi-Nkrumah Abbeku Makonnen said he was proud that his girls reached this far under trying circumstances in their community.

“With ZOSO (zone of special operations) in the community, it’s rough, so I can’t complain,” he commented.