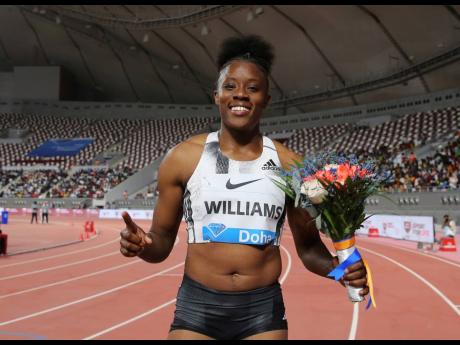 Danielle Williams, the 2015 100m hurdles world champion, shocked herself when she produced her fastest ever season opener to win the sprint hurdle race at the Doha leg of the IAAF Diamond League yesterday.

The 26-year old blitzed to 12.66 seconds to beat Nigerian Tobi Amusan, who clipped her for the Commonwealth Games title last year, and reigning Olympic Champion Brianna McNeal, who finished seventh. Amusan registered 12.73 for second, while the American Sharika Nelvis grabbed the third-place spot with 12.78 seconds. McNeal could only manage 12.94.

“I didn’t expect that. It was a big surprise, so I am very happy,” Williams said after the race. “It is a big step forward for me and I am happy I got the win. Now, I just need to remain consistent and stay injury free.”

Williams had suffered a minor setback earlier this year when she sustained a knee injury, which forced her to skip the indoor season. Commonwealth Games champion Janieve Russell also produced her fastest-ever season opener with 55.28 seconds in the 400m hurdles, but she finished fourth.

The American pair of Dalilah Muhammad and Ashley Spencer finished first and second in the race, with 53.61 and 54.72 respectively.

Anna Ryzhkova of Ukraine rounded out the top three with 54.82 seconds.

Natoya Goule, who had a stellar indoor season this year, could only manage 2:00.96 minutes for eighth in the women’s 800m. Caster Semenya, who was allowed to compete in the 800m for the final time without having to take medication to reduce her testosterone levels, won the race by a huge margin in 1:54.98 minutes.

Semenya said after the race: “For me, I believe nothing in life is hard, because it is up to you how you take life. As an athlete, I believe in sportsmanship, and what sports teaches you is to keep pushing on despite all odds,” she said.

Francine Niyonsaba of Burundi finished second in 1:57.75 minutes, while Ajee Wilson of the USA was third in 1:58.83.