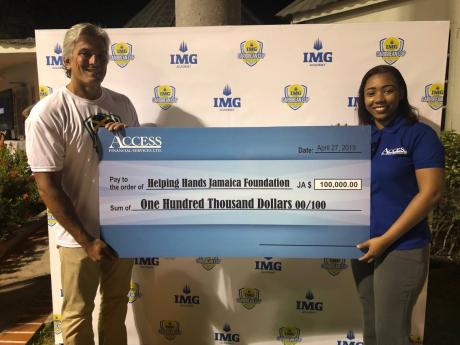 Karl Hale, founder of Helping Hands Jamaica Foundation is proud to have partnered with Access Financial Services this year for the sixth staging of the International Tennis Federation Jamaica Cup tournament at the Half Moon Resort in Montego Bay this week.

Proceeds from the tournament will go towards the construction of the Helping Hands Jamaica Foundation’s 20th school in the country.

“This is their first year involved, but they want to be involved in a much larger way going forward as they were really intrigued by the school building initiative. We are looking forward to growing with them in the process of building more schools through Jamaica,” Hale said.

“We are very passionate about it so we don’t consider it tough because it’s something we like to do. It is all based on our corporate partners that help support us like Access Financial Services. We hope to get more people engaged as we encourage people in Jamaica and in the tournament to give back, so we can keep growing and build for schools to help more kids in Jamaica.

The tournament is one of the few in Jamaica that gives back in a very large way to not just support the school build, but also the development of youth as a whole,” he added.

Hale is proud that the Jamaica Cup, which is in its second year at the Half Moon Resort, remains the largest tournament in the Caribbean series.

“We have over 200 participants plus coaches, trainers, friends, and family that come,” he said.

Being Jamaican myself makes me very proud. This is also special because from this we are looking to build our 20th school, in Treasure Beach, this June,” Hale said.

Hale also runs the Roger Cup Toronto Tennis event which is the largest one-week tennis event in the world.