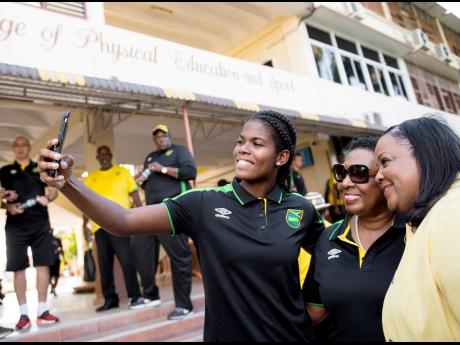 Minister of Culture, Gender, Entertainment and Sport Olivia ‘Babsy’ Grange has already made moves to ensure that the legacy of the Reggae Girlz’s historic qualification to the FIFA Women’s World Cup continues after they take part in the tournament this summer in France.

The senior women’s team became the first female team from the Caribbean to qualify for the tournament when they finished third in the CONCACAF Women’s Championships last year.

They will play out of Group C against Italy, Brazil, and Australia, and the sports minister wants to ensure that the impact of the Girlz’s participation continues long after their final match in France this summer and that their participation will have a meaningful impact on women’s football locally.

Grange shared that the ministry will support the women’s programme with monthly subventions and other funding as necessary.

“The qualification of the Reggae Girlz to the FIFA Women’s World Cup represents one of the most impressive achievements by Jamaica in football, male or female,” Grange said recently. “The best way to honour that achievement is to ensure that the national programme continues to improve. The ministry will continue to support the programme through monthly subventions and special funding as required and as we are able to ensure sustainability and further development.”

Grange continued: “Recently, I announced new requirements for national federations to access funding from the ministry and/or the Sports Development Foundation. Not only are we asking federations to account fully for how they spend public money, but we’re asking them to be more inclusive in how they allocate resources. That means much fairer allocation of resources to women’s teams, special Olympians, paralympians and others. We have deliberately asked the federations to focus on being more inclusive because we believe that’s the best way to end discrimination in sports, ensure greater access for all Jamaicans in sports, and, ultimately, grow sports.”

The minister added that this inclusiveness must also be reflected at the highest level of administration.

“I’ve told the federations that we must also see inclusion at the leadership level. We must see greater diversity in the leadership of our sports governing bodies. So we must never again see all-male or all-female boards or committees for any of our federations or associations,” said Grange.

The Reggae Girlz will start their campaign at the FIFA Women’s World Cup against Brazil on June 9.