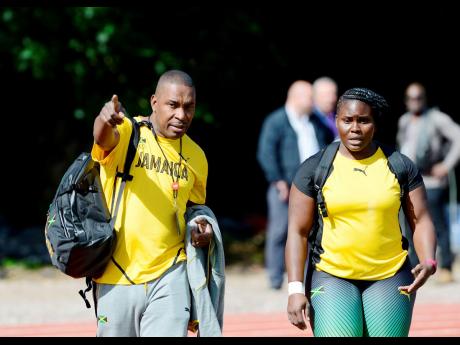 Ricardo Makyn
Dr Carl Bruce (left) in discussion with Danniel Thomas-Dodd during a JAAA training camp at the University of Birmingham ahead of the IAAF World Championships in London in 2017.

Dr Warren Blake, president of the Jamaica Athletics Administrative Association (JAAA), says that the association has identified three locations in Europe that are being considered as the base for Jamaica’s 10-day training camp, which will be held ahead of this year’s IAAF World Championships in Doha, Qatar.

The World Championships will be held from September 27 to October 6 at the Khalifa International Stadium.

Blake told The Sunday Gleaner that the JAAA is determined to secure a location that will help the Jamaican athletes prepare and get acclimatised to the cold temperatures, which they may encounter inside the air-conditioned Khalifa International Stadium.

“We are considering locations in Spain, Italy, and Oman, but we have not signed off on any of these locations as yet,” said Blake during a recent interview.

“These locations are going to be as good as we can get. Our athletes will certainly benefit a lot from any one of these locations once we decide on the final one,” he added.

The venue, which was refurbished in 2017, has a 48,000 seating capacity. The stadium is part of the Doha Sports City, which also includes the Aspire Academy, the Hamad Aquatic Centre, and the Aspire Tower and was the site of Friday’s Doha Diamond League.

Blake added that his association is worried about the low temperatures that the athletes are likely to face at the stadium, noting that they have since expressed their concerns to the organisers of the event as well as the sports’ governing body, the IAAF.

He added: “It is something that we will be negotiating – that they don’t turn the stadium temperature down too cold that it creates a problem for our athletes. It is an issue that I have already raised with the organisers and the IAAF.”