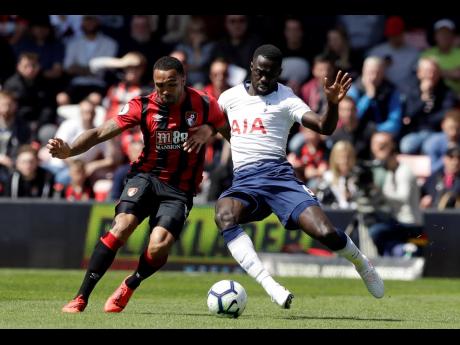 Nine-man Tottenham conceded an injury-time goal to lose 1-0 at Bournemouth, narrowly failing to hang on after having Son Heung-min and Juan Foyth sent off in a five-minute span around half-time in the Premier League yesterday.

Nathan Ake nodded in a corner in the first minute of stoppage time as Bournemouth finally broke through Tottenham’s resistance at Vitality Stadium.

Son was shown a straight red card for pushing over Jefferson Lerma in the 43rd minute, becoming the first South Korean player to be dismissed in England’s top flight. Then Foyth, an Argentine defender on as a half-time substitute, barely lasted two minutes after being sent off for a studs-first lunge at Jack Simpson.

Spurs defended stoutly but couldn’t eke out a point that would have inched them closer to Champions League qualification. They stayed four points clear of fifth-place Arsenal, which have two games left compared to Tottenham’s one. Chelsea, in fourth place, are two points behind Tottenham.

It was hardly the preparation an already fatigued Tottenham squad needed ahead of the second leg of their Champions League semi-final at Ajax on Wednesday. Ajax won the first leg 1-0 on Tuesday.

“This is not the moment to make one or two players guilty,” Tottenham goalkeeper Hugo Lloris said. “We are a team. We will deal with this situation and we must get the three points that we need.

“Whatever happens, we must finish as well as we can. We played so many games the last two months, the schedule is crazy.”

It was an ill-disciplined display overall from Tottenham, which were lucky to see holding midfielder Eric Dier avoid a red card halfway through the first half. Already on a booking, Dier appeared to trip Josh King from behind but the referee didn’t give the foul.

Dier was then fortunate not to give away a penalty for clipping the heels of Callum Wilson in the area, and wound up being substituted at half-time.

It was a rare loss of temper for Son for his red card. After giving away a foul, the winger was getting up to his feet when he appeared to be struck on the back by the retreating Lerma. Son reacted angrily, shoving his opponent high in the chest.

Foyth, on for the yellow-carded Jan Vertonghen, also lost his composure after letting the ball get away from him at the end of a foraging run down the centre of the field. On the stretch, his straightened right leg connected with Simpson as the Bournemouth defender cleared the ball.

Already missing captain and top scorer Harry Kane because of injury, Tottenham will be lacking their other attacking inspiration in Son, for the team’s final league game of the season against Everton next weekend.

Whatever happens today when Chelsea play Watford and Arsenal host Brighton, Tottenham will secure a top-four finish if they beat Everton.

“We are third, we are competing for the top four and in the semi-finals of the Champions League,” Tottenham manager Mauricio Pochettino said. “If you look back at the first game of the season, to be in position we are in today we’d be happy.”