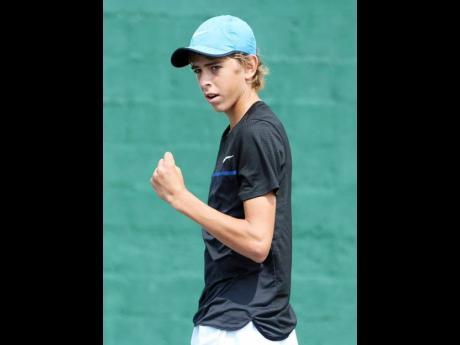 Seventeen-year-old Blaise Bicknell, one of Jamaica’s top junior tennis players, continues to have a good year on the circuit.

On Saturday, he won the ITF Delray Beach Junior Tournament in Florida by defeating the top-seeded player, Blu Baker of Great Britain, 6-4, 6-1. Bicknell, who was seeded at No. 2 and is now ranked 125th in the world, played what he described as his “best tennis of the tournament” to defeat Baker, who is ranked No. 82 among the world’s junior players.

Bicknell said that he was very pleased with the victory and knew that he had to play very well to defeat Baker, whom he described as “my good friend and a very skilled and tenacious player”.

Both players faced many challenges to get to the final but dropped only one set each in getting there. In their match, the first set was very close, and one service break made the difference. However, in the second set, good serving and shot selection by Bicknell made the difference as he won 6-1.

Bicknell, who told The Gleaner afterwards that his goal this year is “to at least make it to the main draw of the Junior Grand Slam tournaments”, is now on his way to Austria, where he is scheduled to play in two tournaments over the next few weeks. Bicknell, who is accompanied by his coach, Mel Spence Jr said yesterday that he is looking forward to these tournaments as they will be on his favoured red clay surface and that good performances there will help his world ranking. Another goal for the year, he said, is to break into the top 100 in the world, and this means that he has to “work hard and play well consistently”.