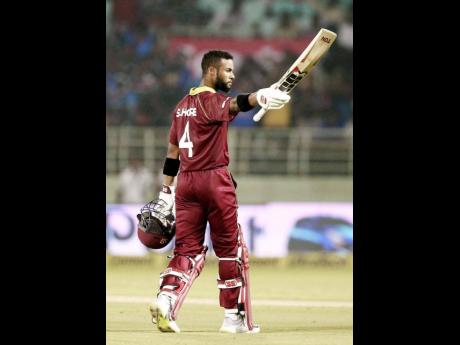 Led by a world-record One-Day International (ODI) opening stand between John Campbell and Shai Hope, the Windies romped to an emphatic 196-run win over Ireland in the first match of the Tri-Nation series here at the Clontarf Cricket Club yesterday.

Campbell, who scored 179, and Hope, who made 170, added 365 runs for the first wicket to help propel the Windies to 381 for three, their second-highest-ever ODI total.

Ireland never threatened their mammoth target, and once they were reduced to 21 for three early on, they eventually folded for just 185, with off-spinner Ashley Nurse being the main destroyer with four wickets.

But the day belonged to the two 25-year-old batsmen, who set a number of records during their historic partnership.

They also became the second set of openers, behind New Zealand’s Brendon McCullum and James Marshall, to both score 150 in an ODI.

Campbell and Hope also came agonisingly close to posting the highest-ever partnership in ODIs but fell just short of the 372 put on by fellow West Indians Chris Gayle and Marlon Samuels four years ago.

And had they batted out the 17 balls remaining prior to Campbell’s dismissal, they would have become the first set of ODI openers to bat through the entire first innings of an ODI.