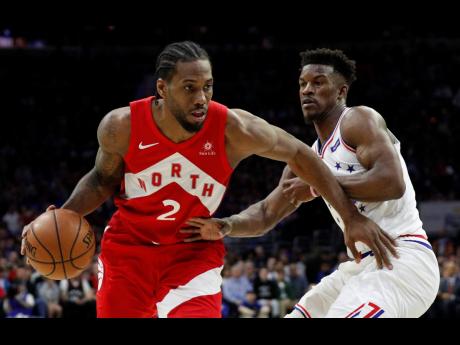 Kawhi Leonard got some help from his teammates to stay close and then finished it off himself.

Leonard scored 39 points, including a clutch three-pointer with 1:01 left on the clock, and the Toronto Raptors beat the Philadelphia 76ers 101-96 last night to even the Eastern Conference semi-final series at 2-2.

“Just really growing up learning from great players, I was fortunate enough to be on some good teams early,” Leonard said, “so I was able to see defences and go on deep play-off runs, and I feel that helped me out today.”

“We needed some punch around the roster,” Raptors coach Nick Nurse said. “It was a different mentality. Guys were looking to shoot, taking the first shot that was there.”

Jimmy Butler scored 29, and JJ Redick had 19 for Philadelphia. The 76ers are trying to reach the conference finals for the first time since Allen Iverson led them to the NBA Finals in 2001.

Toronto, who earned the No. 2 seed after winning 58 games, have been bounced out in the semis two straight seasons.

Joel Embiid struggled after scoring 33 points in Philadelphia’s 21-point victory in Game Three. The All-Star ­centre played through an illness and only had 11. Sixers coach Brett Brown said Embiid texted him early in the morning saying he was not sure if he could play.

“To his credit, he willed his way through it,” Brown said.

Butler banked in a three-pointer from the top of the circle as the shot clock expired after briefly losing the ball to give the Sixers an 84-81 lead in the fourth. But Gasol answered with a three to tie it, and the Raptors went up 89-85 on Leonard’s jumper. Butler and Leonard traded a pair of free throws before Redick hit a three to cut it to 91-90 with 2:07 left.

Following a turnover, Embiid missed a layup. Leonard then nailed a step-back three to put Toronto up 94-90. Danny Green made four free throws in the final minute to ice it.

Brown called Leonard’s three-pointer a “back breaker” and compared his ability to create his own shot to Kobe Bryant. The three came right before the shot clock expired, and Leonard had Embiid in his face.

“I came off a pick-and-roll. They were switching. Embiid is a good defender, long, and I just wanted to get it to the back of the rim,” Leonard said.

Playing before a raucous crowd, the Sixers failed to take control of the series and now must win at least one more game on the road to advance.