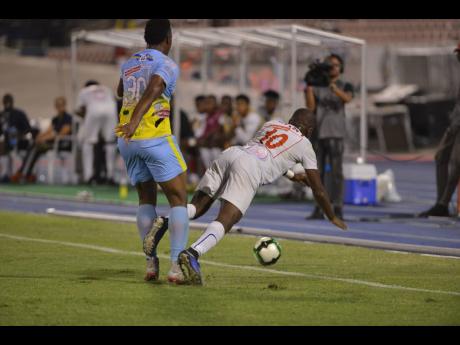 The unfortunate spectacle that unfolded in front of the eyes of tens of thousands of local football fans during last week’s grand final of the Red Stripe Premier League (RSPL) between eventual champions Portmore United and Waterhouse Football Club inflicted yet another black eye to the local game and left enough blame to go around for all the culpable parties.

The fans who engaged in the despicable throwing of missiles, the players who went off the top with their aggression and general poor behaviour, the match officials who failed to take and maintain control of the game, the security forces who ineptly reacted instead of being in preventative and proactive mode, and the Professional Football Association of Jamaica (PFAJ), the body responsible for organising and staging the game, should all shoulder varying levels of blame for the high-­profile embarrassment that marred what was supposed to be a spectacular season-ending show.

The reality is that Jamaica ­continues to feel its way around as a football nation, borne out in the naïvety of some of the ­reactions to the reality as it unfolded on Monday night to be totally dependent on the good sense of the fans in the stands and the ­players on the field instead of putting the necessary control systems in place. The obvious lack of understanding of the level of emotions that a big football final would likely evoke was reflected in the appointment of these particular referees and the subsequent way the game was handled. The PFAJ and the security forces did recognise what was at stake, and what was likely to happen in a game of this magnitude, and what should have been put in place.

With an open appreciation that Monday night’s fiasco was simply the ugly side of the still wonderful game, my real disappointment was with the poor technical quality of football on show, not just for the Premier league final, but that it was representative of the entire season, as evidenced by the absence of many, if any, star players emerging. The honour of leading goal scorer for the season was shared among three players with a measly 12 goals each. That in itself tells the story.

I have been asking these ­questions over the past month or so: Who is Jamaica’s best football player right now? Who is the standout star of local football? Generations gone by, the names of the top players of the day would be on the lips of every football fan, whether it was Alan ‘Skill’ Cole, Herbert ‘Diego’ Gordon, Lenworth ‘Teacha’ Hyde through to Hector Wright, Theodore ‘Tappa’ Whitmore, and Walter ‘Blacka’ Boyd. At one point or another, these were the near-unanimous choices by Jamaican football fans of the nation’s best player of their time. Who is Jamaica’s best player now? The fact that it is so difficult to come up with a name speaks to the real crisis in the local game.

The conspicuous lack of star power in the league is a sign of a much bigger crisis in local ­football than two players being red-carded for getting into a fight in the heat of battle of the RSPL final. That the appointed team of match officials was unable to handle the ­pressure of the final and that a combination of factors contributed to the game descending into a bottle-throwing fiasco were all regrettable and unfortunate and should be discussed and debated. However, if we are serious about the game of football, we need to at least have a honest understanding of what constitutes the real crisis in local football.