Royal upset! - Princess Annie grabs surprise win over I Am Di One in Jamaica Oaks 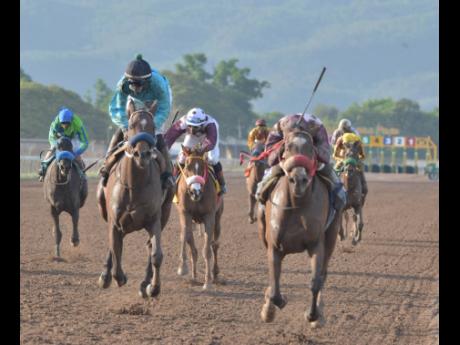 Kenyon Hemans
Princess Annie (right), ridden by Phillip Parchment, comes through for an upset victory in the Jamaica Oaks at Caymanas Park in St Catherine on Saturday.

LADY BLUE was the bait for Barbadian jockey Simon Husbands, who swallowed hook, line and sinker aboard Anthony Nunes’ 1-5 favourite, I AM DI ONE, after which PRINCESS ANNIE delivered the sucker punch for Team Wayne Dacosta, scoring a 9-1 upset in Saturday’s Jamaica Oaks.

Seemingly believing he could have done anything aboard I AM DI ONE, who had easily won the 1000 Guineas at a mile three weeks prior, Husbands rode the filly as if the winning post was at the half-mile marker of the 10-furlong Oaks, shooting clear of LADY BLUE from five furlongs out while commentator Brian Rickman declared PRINCESS ANNIE “under a ride but going nowhere”, second to last in the 11-horse field.

However, Omar Walker aboard LADY BLUE, who had run a brave second in the Guineas, did exactly what champion trainer DaCosta had crafted, attacking I AM DI ONE coming off the home turn, not allowing the big filly to catch a breather after her unnecessary back-stretch exertions.

Though a tiring LADY BLUE was never going to get past I AM DI ONE, who fought her off to maintain her lead, the overall effort took toll a furlong and a quarter out, causing her to drift out on wobbly legs approaching the furlong pole, falling prey to, at first, her stablemate, PRINCESS AVA, then a flying PRINCESS ANNIE, who motored from fifth to hit the front a half-furlong out in a charging run along the rail.

Standing tall and watching the proceedings as LADY BLUE weakened out of contention into fourth place, Walker was visibly celebrating the tag team’s success as Phillip Parchment drove home PRINCESS ANNIE at odds of 9-1 from PRINCESS AVA and horribly ridden I AM DI ONE, beating Anthony Nunes’ pair in a continuation of the most intense stable rivalry at Caymanas Park since the days of Philip Feanny and Kenneth Mattis.

DaCosta, who trails Nunes by more than $10 million in the trainers’ championship stakes race after coming out on top with an 18th title in a bruising battle with his nemesis last year, described his Oaks strategy as “a one-two ­situation” to defeat I AM DI ONE.

“The plan was for LADY BLUE to run the headline hot and for PRINCESS ANNIE to run on,” he said, adding that “she was finishing hands over fist” for fifth in the Guineas at a mile, beaten seven lengths by I AM DI ONE, “and must have a chance going two furlongs longer”.

PRINCESS ANNIE, who had actually started her career as a 3-5 favourite when debuting as a two-year-old last August, failed to deliver as a juvenile, winning only one race prior to her Oaks upset, which marked owner Carlton Watson’s first-ever classic victory.

“She has staying power. She is FUTURE KING’s sister,” he pointed out, referring to her half-brother, who had won the 2000 Guineas in 2016 before being disqualified after passing the post first in the Jamaica Derby awarded to Nunes’ ORPHEUS in a dramatic double disqualification, which had also taken out second-past-the post, BIGDADDYKOOL.