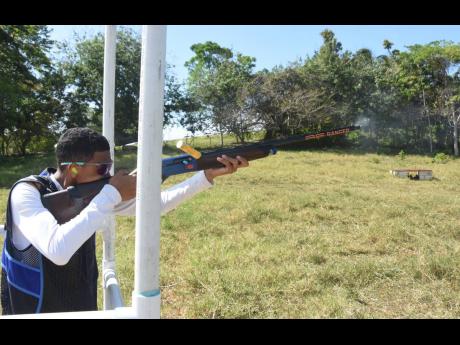 Contributed
David Wong in action at the Savannah Hunting Club Sporting Clays tournament, which took place at the Mount Plenty Estate in St Ann on Sunday.

The 13-year-old has been under the guidance of Azan since the summer of 2017 and was crowned Savannah Hunting Club Sporting Clays tournament champion on Sunday.

Wong, who competed out of the sub-junior class, shot a score of 88 to stun the large field of nearly 150 shooters at the Mount Plenty Estate St Ann, with junior champion Nathan Chin upstaging the rest of the proceedings to take second place with a score of 87.

“This is the first in the history of the club that a 13-year-old has won and a 14-year-old is runner-up in a tournament with all of the top shooters,” Azan said. “David started shooting two years ago. When he came, he was shy and had no self-confidence. But I sensed he was attentive and wanted to learn. From early, he wanted to achieve, and once you can pick up those characteristics in a kid, he is trainable.

“I had to be patient with him because he was unsure of himself, but as we progressed, he started to absorb information, and when he competed, he started to do well. But he was very hard on himself, and he compared himself with the top shooters, so even when he did well he was not pleased,” he continued.

However, Azan thought that on Sunday, the young shooter showed mental strength and composure to overcome a strong field.

“His preparation on Saturday was all mental, nothing technical,” Azan said. “He went through pre-shot and post-shot routines and all mental work, visualisation, imagery, reaction – when you miss and how you deal with it –and his performance was textbook. “Normally he would get upset if he missed, but that didn’t happen; he would pause and make the correction and move on,” he said.

In a shoot-off for the A Class, Greg Chong (85) beat Christian Sasso, who finished second, and Ray McMasters was third. Zachary Harris (85) topped the B Class with 85, ahead Ryon Chen (83) in second. Class C went to Alex Cunningham (85), and second to Ricky Duquesnay (81).

Mark Benjamin (81) topped Class D ahead of Toby Hugh (80), while the E Class went to Cody Delisser (70), who defeated Gordon Bucknor (62). Justin Samuda took the Hunters Class with 69. Toni Barnes (67) outshot Wendy McMasters (67) in a shoot-off for the ladies title, while Chin captured the junior crown and Wong, the sub-junior title.