Campbell thanks patience for world record 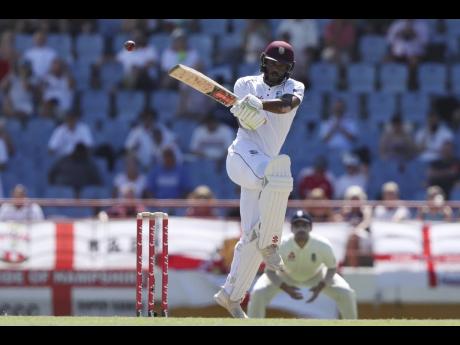 Left-hander John Campbell hailed the tenacity of himself and opening partner Shai Hope after they were forced to overcome a difficult start to post their world-record stand in the opening One-Day International (ODI) of the Tri-Nation Series against Ireland.

Campbell lashed 179 – his maiden ODI hundred – while Hope carved out 170 as they posted a record 365 for the first wicket and the second-highest partnership ever in ODIs.

“I think it was difficult to hit big shots right throughout,” Campbell said after the Windies completed an uncomplicated 196-run victory at Castle Avenue.

“I think both Shai and I, we played really well. It was tough at the beginning. We really couldn’t get the ball away, but both of us just said let’s hang in as long as possible to see how far we could get it because we knew that the guys coming in would have to start (again), and then that would take up a lot more balls, so we just wanted to see how far we could take it.”

The 25-year-old Campbell, in only his sixth ODI, blasted 15 fours and half-dozen sixes off 137 balls, while Hope stroked 22 fours and two sixes off 152 deliveries en route to his fifth hundred in the format.

Scoring proved difficult initially, however, with a mere four boundaries coming in the first 11 overs as the Windies laboured to 42 without loss after being sent in.

Ironically, Campbell survived a life off the first ball of the contest when he sneaked a suicidal single to mid-off, where the fielder’s throw missed at the non-striker’s end with the Jamaican short of his ground.

“I was just looking to get off the mark,” Campbell recounted.

“I was a little bit hesitant, but thankfully, [the fielder] missed, and from there I was a lot more relaxed, and I felt a lot better. Shai helped me along the way right throughout.”

The Windies take on Bangladesh in the second match of the tournament today.