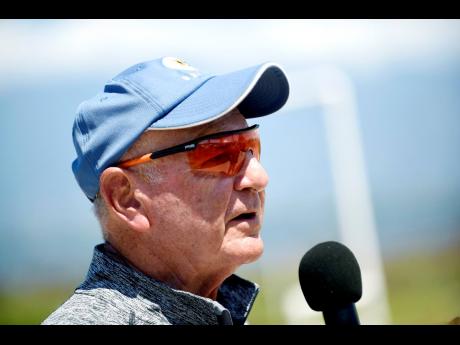 Samuda credits much of this to the work of national coach and highly respected skeet ­personality Khaleel Azan.

Jordan said Azan, the man tasked with developing the nation’s young shooters, not only tutors these kids on the technicalities of shooting and the art of operating guns but leaves with them profound life lessons that they can take not only into competition but through life.

The 13-year-old Wong won the Savannah Hunting Club Sporting Clays Tournament with a score of 88 on Saturday, beating 14-year-old Chin, with a score of 87, into second from a field of nearly 150 competitors, including some top local shooters, and Samuda thought Azan’s influence played a great part in the youngsters’ triumph.

“It was another history-making event for the club because we had the youngest ever HOA (High Over All), David Wong of the sub-junior category, and the runner-up was also a junior, Nathan Chin, so a sub-junior and a junior taking home the top spots on the day, was spectacular. It’s a tremendous achievement, it goes to show the talent of our juniors. We have a programme with close to 70 juniors, and Nathan and David have spent a lot of time honing their skills. They are both coached by Khaleel Azan, and Khaleel spent a lot of time on the mental aspect of competition.

“This (tournament) was the second largest event we’ve ever had, with close to 150 competitors, so for a sub-junior (Wong) and a ­junior (Chin) to have the mental fortitude to see that and maintain their composure all day and put up such great scores – 88 and 87 – it is testimony not only to their shooting skills but their mental toughness to withstand such a large field and come out ­victorious,” Samuda said.

“When you speak to the juniors themselves, they will tell you what a huge impact Mr Azan is on their shooting, but not only their shooting, but their lives overall. Khaleel Azan is not all about shooting lessons and how to improve their shooting, but he gives life lessons they can take with them for the rest of their lives, and they clearly respond to him, and the results yesterday (Sunday) were clear indication of that response,” he added.

Samuda, who took over the reins from Evan Thwaites, who did not seek re-election at the Jamaica Skeet Club’s Annual General Meeting in March, was also pleased to see the support for the Savannah Hunting Club Sporting Clays Tournament, which returned to the calendar after more than a decade off the scene.

“Overall, it was a fantastic turnout. The club has hosted events for many years but [took a] break for about 12 years, and they are back now at a brand-new venue at Mount Plenty Estate in Walkerswood, St Ann,” he said.

Samuda thought the course, which was designed by president of the Savannah Hunting Club and nine-time national shotgun champion Ian Banks, was creative and difficult.

“The highest score was 88, which is a great score for such a challenging course. But overall, our members and shooters responded greatly to the new venue. We had over 150 shooters, the second-largest number of shooters we had at any local venue ever, and the event was competitive,” Samuda added.