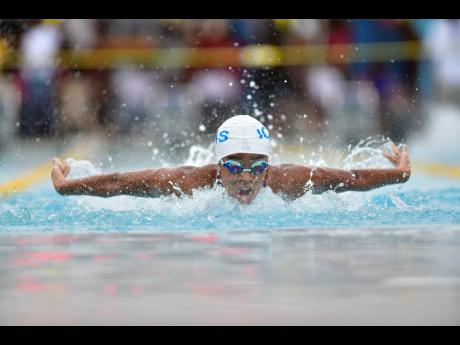 Lyn, speaking after the country’s impressive performance at the Carifta Swim Championships in Barbados, where the team registered their best finish in over a decade, was responding to a question on whether or not 14-year-old Alvaranga, who tallied 44 points for Jamaica at the championships to end as the top-scoring female swimmer for the country, represented the island’s best hope to emulate world record-breaking Jamaican swimmer Alia Atkinson.

In an article published in The Gleaner on April 29, 2019, Lyn stated, “We have much better and much faster swimmers than Alvaranga. She has swimmers who have beaten her. Sabrina Lyn beat her over and over, so the reality is that she must prove to us that she is as good as a Sabrina Lyn. It’s the same age group, but Sabrina Lyn is fast.”

The swimming boss has since faced heavy criticism from both within and outside the local swimming fraternity and is now underlining that his intention was never to upset anyone while offering his apology to the youngster and those offended by his statements.

“The ASAJ remains strong in support of all our athletes. I make special reference to the Gleaner article of April 29, 2019. I want to categorically state that it was never my intention to cause any offence to any of our swimmers, and any statement that I made that is being interpreted in that way, I wish to state that this was never my intention, and if this occurred, I apologise for it. It was ill advised to compare age-group swimmers with Olympians,” the swim boss told The Gleaner yesterday.

Lyn noted his respect for the young swimmer and her peers and believes she has an important role to play in the future of the sport.

“I value her (Alvaranga), and she has a very important role to play in the development of swimming in Jamaica. She is one of the greats, but it’s just how my comments were interpreted. She has an outstanding future,” Lyn said.

Lyn, who came to the helm in 2017, has helped the sport make a number of strides, including a $27.5-million ­renovation of the National Aquatic Centre last March. The administrator said he is looking to put the controversy behind him and is hoping that the fraternity can continue to work together and focus on the sport’s development.

“I am proud to have in the national squad a group of outstanding young swimmers who represented Jamaica so well at the recent Carifta Swimming Championships. I look forward to greater unity and success within the swimming fraternity and to working together with all participants in our sport,” Lyn said.