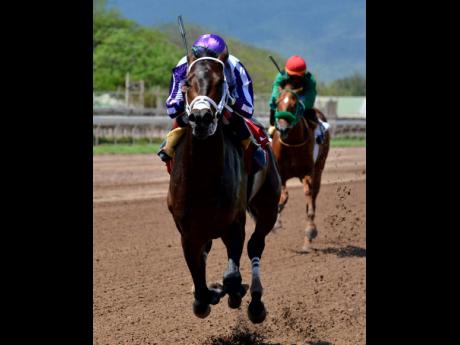 Jamaican Dane Nelson enjoyed a productive weekend at the newly minted Century Mile, coming away with four wins to be among the early leaders in the fledgling season.

On Saturday, Nelson dominated the seven-race card with three wins – his first taste of success on the ­second raceday of the campaign – before ­collecting a single winner on Sunday to further increase his tally.

He lies third in the standings behind leader Rigo Sarmiento on six wins with another Venezuelan, Wilmer Galviz, second on five.

On Saturday, Nelson raised the curtain on proceedings when he partnered with 15-2 chance Candy Red to beat the three-year-old and upward fillies and mares by a neck in a five-furlong sprint.

The four-year-old bay filly dueled with Reds Little Star early on before getting free and then clinging to the small advantage at the wire.

Nelson returned to the winners’ enclosure in race four when he guided favourite Thatsafactjack to a 7-¼ length victory over the three-year-olds and upward in another five-furlong sprint.

The three-year-old roan gelding broke sharply and sprinted to a six-length lead, and the final run-in was only a formality as Nelson took his mount past the wire without a ­challenger in sight.

His final win came aboard 4-1 bet Holler at the Moon when he collared the three-year-olds and upward, ­winless this year, by 3-¼ lengths.

The seven-year-old chestnut gelding got the better of the exchanges with Solvang and Beach Mode to establish an early lead, which he never relinquished throughout the five-furlong sprint.