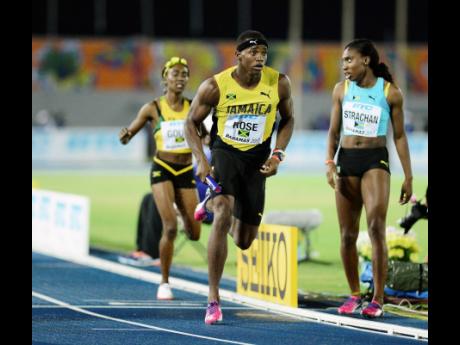 Gladstone Taylor
Jamari Rose (centre) sets off after receiving the baton from Natoya Goule in the 4x400m mixed relay at the 2017 IAAF World Relays in The Bahamas.

President of the Jamaica Athletics Administrative Association (JAAA) Dr Warren Blake says that the travel arrangements for the team going to Japan for the IAAF World Relays were made to coincide with the opening time of the competition’s athletes’ village in order to reduce cost. His comments came after several members of the team expressed disappointment that they would be arriving in Yokohama, the host city, too close to the first day of competition. The athletes are expected to arrive in Yokohama today for the two-day competition, which begins on Saturday, May 11.

Two of the athletes, Nesta Carter and Julian Forte said that they would have wished to have had enough time to rest and practise before the competition starts, but Blake said it would have been too expensive to facilitate an earlier arrival date.

“To put a 40-member team and then house them a week before would have been expensive, and that is one of the reasons (for the late arrival in Japan),” Blake explained. “Economics has to play a part.

“We wouldn’t have a training camp for something like the World Relays. We do not have training camps for relays because if some of the members of the team don’t turn up, then you would have wasted the money.

“They (athletes) will get a day of practice before the competition starts, and I think we are getting in around the same time as some of the other contingents,” added the JAAA boss.

Blake says that despite the issues with the late arrival in the Asian city, he is expecting great things from the team.

“We sent the strongest team that we could have assembled, and we are expecting that they will go there and compete to the best of their abilities,” Blake told The Gleaner.

“I do not normally engage in medal speculations, but I expect the team to perform to its usual high standards,” he added.

Jamaica’s best showing at the event came at the first staging in 2014, when they tallied 46 team points, with two gold and three silver medals.