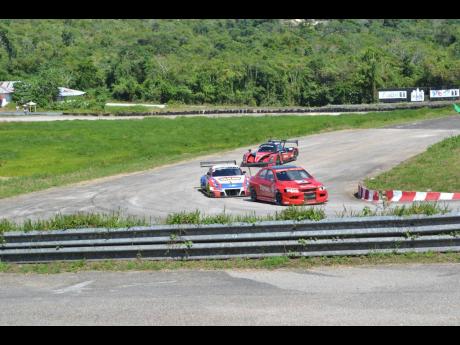 Errol Crosby
Racers in the Carnival of Speed 2016.

The names David Summerbell Jr, Doug Gore, and Kyle Gregg should rev the anticipation with a promise of continued keen competition and rivalry at the Jamaica Race Drivers Club’s (JRDC) second race meet of the year, ‘Circuit Wheels on Fire’, set for Sunday, May 26, at the Jamwest Motorsports and Adventure Park in Negril, Westmoreland.

The ‘Carnival of Speed’ marked the start of the season at Dover last Easter. The meet is no longer part of the Caribbean Motor Racing Championship (CMRC) series and is instead one leg of a four-race local series.

Gregg, the reigning three-time champion, expects a tough challenge but intends to repeat.

“I plan to go there and break the track record again as we did last year.

We have been undefeated for three years, so we hope to go out with that same mentality and resolve and beat,” he told The Gleaner.

“My car is suited for Jamwest more than Dover raceway, so when I am at Jamwest, I am more comfortable, more confident ... but it should be a close event,” he added.

Excitement is also brewing in the motorcycle category as McShane Heslop and Mario Woon have sworn to topple the dominance of Kyle Reynolds, who has won the last five editions.

“Kyle Reynolds has been champion for the last five years, but Daniel Woon is hell-bent on defeating him.

He has a passion and an ambition to take down Kyle Reynolds,” he said.

Reynolds leads the racers with 30 points, with the closest follower on only 19.

“So Robert McDonald will have to make sure he seals the deal in this round to get himself back on top,” Chung commented, noting that although the event would not be part of the CMRC series this year, it will still have an international flavour, as some competitors from the United States will be in attendance.

He also believes that adding incentives will make the meet more competitive.

“What we are trying to do for the motorcycle to get the game levelled up, is to give prizes to motivate the guys.

We weren’t giving anything other than a trophy, but now you get money. We want to get the sport more professional,” he said.

Each category will be divided into two classes, with each class featuring three races.