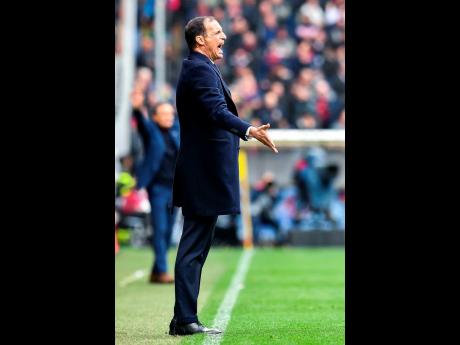 Juventus have little to play for now, and coach Massimiliano Allegri is using his pressure-free time to think about his future.

The 51-year-old Allegri has won five straight league titles, four Italian Cups and two Italian Super Cups in five seasons at Juventus. However, the Champions League continues to elude the team, which reached the final in 2015 and 2017.

This was supposed to be Juve’s year after they signed Cristiano Ronaldo, but the club lost to Ajax in the quarter-finals, and Allegri said the disappointment is “worse this year than other times”.

Allegri’s contract expires at the end of the season.

“We need to analyse what has gone well and what has not gone well and plan the future,” Allegri said. “Every year, people say I’m leaving, and then I stay. And this time, we have the advantage of an extra month to plan.”

Juventus visit Roma on Sunday before hosting Atalanta the following week. Both teams are battling for a Champions League berth. Atalanta currently occupy fourth place and the final qualifying position but have only three points more than Roma and AC Milan.

Juventus travel to Sampdoria for their final game of the season, which could also be Allegri’s final game in charge.

Allegri could end up being replaced by the man he took over from.

Antonio Conte left Juventus in 2014 after guiding the club to three straight Serie A titles. He went on to coach the Italian national team before taking over at Chelsea in 2016.

During his two-year tenure with the English club, the 49-year-old Conte won the Premier League and FA Cup but was fired in June 2018.

Speculation has grown that Conte is set to return to Italian football, and Roma seemed his most likely destination with current coach Claudio Ranieri only in a caretaker role following Eusebio Di Francesco’s firing.

However, that is the only club Conte has publicly ruled out.

“I fell in love with Rome, spending a lot of time there in my two years as Italy coach. You feel the passion at the Olimpico. But today, the conditions for me to coach Roma aren’t there,” Conte told Italian newspaper Gazzetta dello Sport. “But I think one day, sooner or later, I’ll coach Roma.”