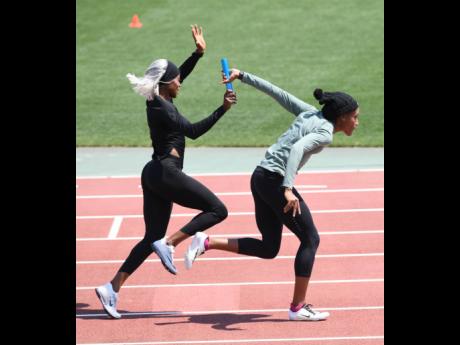 Ricardo Makyn
Elaine Thompson hands off the baton to Stephenie Ann McPherson, in a training session at the warm up track adjacent to the Yokohama Stadium this morning, ahead of tomorrow's start of the IAAF World Relay Games in Yokohama, Japan.

Ludlow Watts, the manger of Jamaica’s athletics team at the 2019 IAAF World Relays, does not believe the team's performance will be diminished because of limited training sessions.

The team only managed to train once since arriving here on Thursday, but Watts believes the field is level, as most of the other contingents arrived on the same day as Jamaica, and were also reduced to one training session.

A few members of the team complained about arriving too close to the beginning of the competition. But despite this, Watts believes the team has been adjusting well.

“Whenever we have to travel any for distance around the world there will be some discomfort, but we have been doing well,” he said.

The team have also had to deal with the absence of two of its more experienced 4x100m sprinters on the male side as Kenroy Anderson, like Yohan Blake did, withdrew from the team before the championships.

“Kenroy Anderson pulled out late but we had Chadic Hinds,” Watts said. “The team is very competent even though it is not the best team that we have taken to the World Relays. But we are using it as preparation for Doha (IAAF World Championships) and the Olympic Games, so I expect us to do well.”