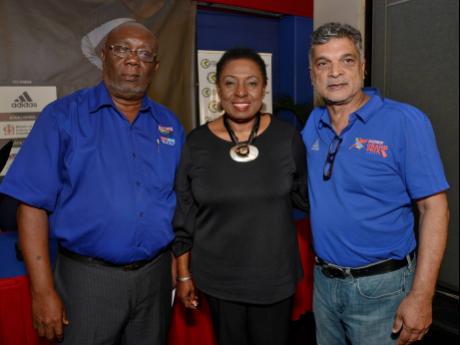 Chairman of the Racers Grand Prix Organising Committee Glen Mills says the meet’s reputation for quality, as well as a strong belief in the strength of the organisation and management of the event, was a key factor in its ability to attract strong sponsorship support in a difficult market.

The event, which is now called the Racers Adidas Grand Prix, will be held at the National Stadium on June 8 and was launched yesterday at The Jamaica Pegasus hotel, just over a week after organisers of another local international meet, the Jamaica International Invitational, announced its cancellation due to a lack of support.

“I can’t speak for anybody, but when we came into the arena, we set a certain standard, and the athletic fraternity saw the quality of the meet and the organisation of the meet,” said Mills. “... So more and more, they are warming to the experience, and a lot of the top athletes want tocome and compete at the meet because the report that they get from those who have been here is fantastic.”

The noted track coach says he is expecting another stellar staging of the event, which will, this year, see the likes of Shelly-Ann Fraser-Pryce, Shaunae Miller-Uibo, Kirani James, and Fred Kerley gracing the track.

“It is going to be great competition because we have persons with great PRs (personal bests), and remember that they are in great shape because everybody is striving to get to the World Championships in Doha, Qatar,” Mills added.

Minister of Sport, Olivia ‘Babsy’ Grange lauded the organisers for their work while highlighting the meet’s growth.

“I have always been one hundred per cent in support of the Racers Grand Prix over the four years, and I admire the professional approach by the organisers of the meet,” said Grange. “I admire how structured and how organised they are in presenting this event, and I know that it will grow from strength to strength, and I will always be prepared to support them with whatever support that they need,” Grange promised.

Xoom, a PayPal service company, is one of the newest sponsors for this year’s event.

Karin Wilson-Edmonds, country local representative of Xoom, said that her company is delighted to be associated with the event.

“Xoom is proud to be supporting some of Jamaica’s top athletes and honoured to be associated with the Racers Track Club, which has produced so many world-class athletes,” said Wilson Edmonds.

The men’s 200m field is also expected to be very competitive. with five of the confirmed athletes dipping below 20 seconds in their careers.

They are Jamaicans Akeem Broomfield, Julian Forte, and Rasheed Dwyer, along with American Ameer Webb and Great Britain’s Miguel Francis.

Reigning Olympic 400m champion Miller-Uibo from The Bahamas will face off against American Phyllis Francis and Jamaicans Christine Day and Chrisann Gordon.