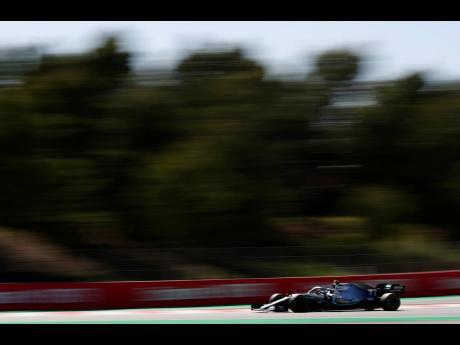 Manu Fernandez
Mercedes driver Valtteri Bottas of Finland during the second free practice at the Barcelona-Catalunya racetrack in Montmelo just outside Barcelona, Spain, yesterday. The Formula One race will take place tomorrow.

Valtteri Bottas and Lewis Hamilton looked poised to extend their dominance of Formula One (F1) after clocking the fastest laps in practice for the Spanish Grand Prix (GP) yesterday.

Ferrari fast-tracked a new engine and brought in other updates during the two-week break since the Mercedes pair claimed their fourth consecutive one-two finish in Azerbaijan. But Hamilton and Bottas were still faster than their Ferrari rivals.

Bottas posted the top times in both sessions under sunny and warm conditions at the Barcelona-Catalunya Circuit, lowering his own mark from the morning session.

Five-time defending champion Hamilton was a sliver behind, at 0.049 seconds slower.

Charles Leclerc had the third-best time in his Ferrari, followed by teammate and former champion Sebastian Vettel.

“Today was good, but it’s only Friday and Ferrari are very close,” F1 leader Bottas said. “The car felt really good today, completely different to how it was in winter testing.”

Ferrari outperformed Mercedes over eight days of preseason testing on the same track near Barcelona, but that advantage evaporated once the real racing began.

More menacing for Ferrari is that Vettel and Leclerc were faster than Hamilton and Bottas in practice at Azerbaijan, only to finish behind them both on race day.

Ferrari team principal Mattia Binotto said even though his team is struggling to catch Mercedes, they are not giving up.

“Certainly we are not happy for the points we have scored so far,” Binotto said. “We’ve still got a good car. The competition is very strong, which is not a surprise. But we are still in the battle.”

Bottas leads defending champion Hamilton by one point overall. Vettel is 35 points behind Bottas in third place. Hamilton has won the Spanish GP three times, including the last two years. Ferrari and the rest of the field could take a glimmer of hope from Bottas having to box for an apparent leak and Hamilton telling the team radio at one point that he was “struggling”.

Otherwise, Mercedes appear ready to extend their record start for a two-car team in F1 after sweeping the first two spots in all four races.

Max Verstappen had the fifth-best time despite mechanical issues with his Red Bull.