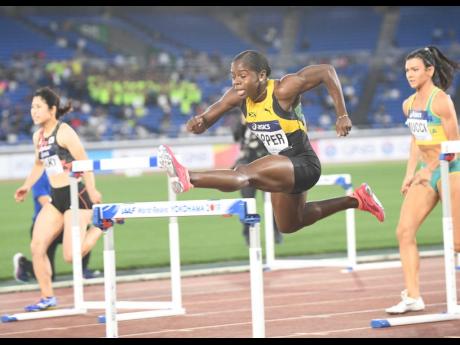 Ricardo Makyn/Chief Photo Editor Megan Tapper clears a hurdle during the heats of the mixed hurdles shuttle relay at the IAAF World Relays in Yokohama, Japan.

Jamaica will not field a team in the final of the mixed hurdles shuttle relay at the IAAF World Relays in Yokohama, Japan after Andrew Riley and replacement runner Norman Pittersgill were forced to withdraw due to injury.

Riley, who helped Jamaica to a win in their heat earlier, suffered a hamstring injury, while Pittersgill went down during warm-up, after a quad problem, meaning the country is not able to field a team in the final.

The Jamaican team, which also included Amoi Brown and Megan Tapper, had won their heat in 55.47 seconds, to advance to the final as the second fastest qualifier behind the United States, 55.09 seconds.

This is the first time that the mixed hurdles shuttle relay, which features two female and two male athletes, was contested at these championships.