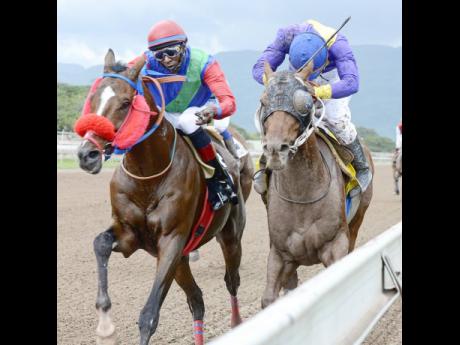 Ian Allen
SUPERLUMINAL (left), with Omar Walker aboard, wins the Alexander Hamilton Trophy by a short head, ahead of SARATOGA SIGHT, ridden by Aaron Chatrie, on February 2, 2019. File

However, his main hopefuls, UNCLE FRANK and WINTER IS COMING, have had their form lines decorated with multiple instances of finishing behind Gary Subratie’s SARATOGA SIGHT, the American allowing them weight on each occasion.

Since getting off the mark locally on his fourth start, SARATOGA SIGHT has either faced the toughest horses in open allowance company or, as was the case in his last two races when back down in class, beaten by the handicaps, allowing fast-rising stars too much weight in overnight allowance.

The winners from SARATOGA SIGHT’s last 10 form lines read like a who’s who of stars, starting with BIGDADDYKOOL beating SHE’S A MANEATER in December’ grade one Miracle Man Trophy, a race Subratie’s foreigner led for five furlongs, going nine and 25 yards, and was still fourth turning for home.

A handful of open allowance races followed in which SARATOGA SIGHT was twice beaten by SUPERLUMINAL, one being a stinging short-head defeat at a mile, among three other losses against his stablemate, NUCLEAR FLIGHT, speedy ANOTHER VIGOROUS and yet-to-be-beaten American, STRANGER DANGER.

Just when Subratie thought SARATOGA SIGHT would have got a break down in class among overnight company, after spending four months in open allowance jail, the six-year-old chestnut ran smack into 2000 Guineas-bound three-year-old, RUN THATCHER RUN, and much-improved MASTER OF HALL , while carrying topweight at seven and a half furlongs.

Next time out, at a mile, SARATOGA SIGHT again paid the price of being a winner overseas, slapped with topweight 126lb, allowing MASTER OF HALL 14lb, losing by four and three-quarter lengths in 1:37.0 the fastest time at the distance since WILL IN CHARGE’s Diamond Mile run in December.

Apparently realising that an insistence to use jockeys instead of any of the more-than-useful claiming apprentices could have cost him a race or two, Subratie has summoned Tevin Foster to slip five pounds off what would have been 126, ironically the easiest assignment SARATOGA SIGHT has had in his last 10 races, since finishing second to HOVER CRAFT at nine furlongs on December 12.

DaCosta is famous for his tag teams but Subratie has caught on to the act so look out for his pair of MY SISTER and UNCLE VINNIE ensuring that the pace collapses for their stablemate, who is really a miler on his best day but should not drop this catch going a furlong shorter.

Anthony Nunes’ SOTOMAYOR had allowed SARATOGA SIGHT four pounds when finishing a length and a half behind him for fourth when both went down to RUN THATCHER RUN and MASTER OF HALL.

It should be noted, though, that when SOTOMAYOR came with his usual late, lazy run inside the last furlong, SARATOGA SIGHT had long made his move, three and a half furlongs out, and was battling RUN THATCHER RUN for the lead at the top of the lane before losing in a driving finish.