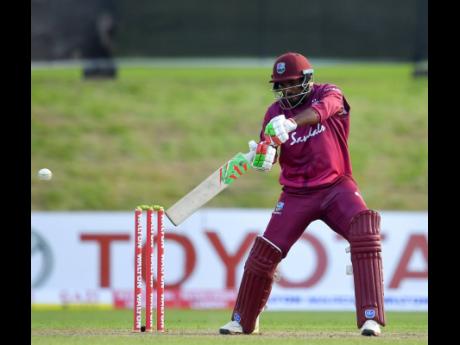 CWI Media
Sunil Ambris plays a cut shot during the One Day International against Ireland. Ambris top scored with 148 runs to lead West Indies to a five wicket win at Malahide Ground in Dublin, Ireland.

Sunil Ambris scored his maiden One-Day International (ODI) century, becoming the first Vincentian to do so for the West Indies, to help propel the regional team to their highest ever successful run chase in ODIs as they claimed victory over Ireland in the Tri-Nation Series here yesterday.

Ambris cracked 148 from just 136 balls as the visitors overhauled Ireland’s challenging total of 327 for five from their 50 overs to end on 331 for five off 47.5 overs.

The West Indies’ previous successful highest run chase in ODIs was 309 against Pakistan in 2017.

His performance overshadowed that of Ireland’s Andy Balbirine, who also scored a fighting century after the home side won the toss and opted to bat first.

Coincidentally, Ambris, who was not named in the Windies’ 15-member squad for the upcoming ICC World Cup, was only promoted to open the batting after John Campbell’s sore back ruled him out.

Ambris, together with the in-form Shai Hope, who was chasing a third-successive century, put on 84 runs for the first wicket in quick time.

And when Hope lost his wicket to William Rankin to be out for 30, followed soon after by Darren Bravo for just 17, Ambris and Roston Chase’s 128-run stand off 116 balls created the perfect launching pad for the Windies.

The shorter and smaller Ambris was the main aggressor during this stand, while Chase customarily worked the ball through the gaps and was content to rotate the strike.

They both looked unbothered by Ireland’s mostly medium pace attack, but four runs away from a deserved half-century, Chase was bowled by left-arm pacer Josh Little.

Ambris’ 169-minute stay at the crease came to an end soon after, too, becoming Rankin’s third victim, as the Windies slipped to 252 for four in the 40th over.

But captain Jason Holder, who smashed 36 from 24 balls, and fellow Barbadian Jonathan Carter, who finished unbeaten on 43 from 27 balls, put on 75 runs at over 10 runs an over to take West Indies within touching distance of their target.

However, with the scores locked, Holder needlessly gave his wicket away, leaving Carter to finish it off in fine style with a boundary.

Rankin was Ireland’s top bowler, ending with figures of 3-65 from his 7.5 overs.