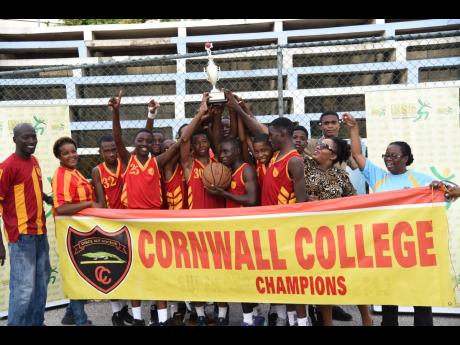 Kavarly Arnold
Players and support personnel for Cornwall College’s (CC) under-14 basketball team celebrate their win in the final of the ISSA Western Conference Under-14 Basketball competition at the Montego Bay Cricket Club Court on Thursday. CC won 49-39 over St James High School.

Cornwall College (CC) ended their ISSA Western Conference Under-14 Basketball title six-year drought, with a 49-39 victory over favourites St James High School, who were handed their first defeat of the season at the Montego Bay Cricket Club Court on Thursday.

CC, who have finished as runners-up to Herbert Morrison Technical High School for the past five seasons, showed character and experience to overturn a four-point half-time deficit to turn the tables on St James High. They were led by point guard Ryan Watson, who scored 18 points. Kemauny Welch top-scored for St James High with 15 points.

Coach of CC Sheldon Pearce admitted that they drew confidence from their semi-final win over arch-rivals Herbert Morrison and said they are looking forward to the all-island competition.

“What we did this season was to play each game on its merit as they come. In the semi-finals, we knew we could beat Herbert Morrison, and having done that, the next big challenge would be the high-flying St James High. What we did was to concentrate on their main scorers, and it worked in our favour, so I don’t think it had anything to do with beating Herbert Morrison. However, it acted as a confidence-booster because it’s been six years since we’ve been battling with them, so I guess it was a given for us to beat St James High,” Pearce said.

“Going into the all-island (competition), we are just going to try to do our best because we know that experience is going to be a factor as these guys are fairly new. We are going out there to participate, see what we can learn and, hopefully, get some favourable results,” he added.

Meanwhile, Omar Taylor, coach of St James High, said the pressure of being the pre-game favourites got to his boys, however, he said that they are looking for a better showing in the all-island tournament.

“I think most of it was just a result of nervousness because it’s the first time these kids are getting so far in a competition. In a final, you know the pressure is there from the whole school, and to carry a banner like that at ages under 14 is not something easy. However, all in all, it was a good fight. We wish we were the victorious ones, but it is just one of those days. We just have to recuperate and come back better and stronger next year,” Taylor said.

“For the all-island, we just want to go there and stamp our names. So we are not necessarily going to win it, but to show that there is a team from St James High. Based off of today’s performance, I think my team would be more focused, so I’m expecting a stronger fight,” he added.