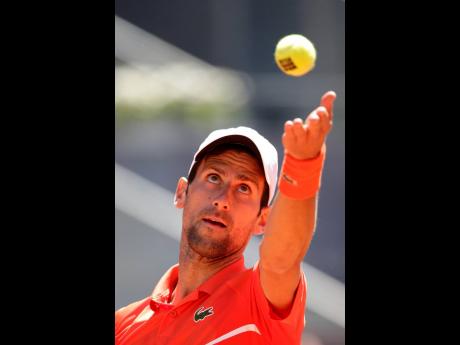 Djokovic outplayed Thiem in both tiebreakers at the Magic Box centre court, converting on his first match point to set up a final against either Rafael Nadal or Stefanos Tsitsipas.

It will be the second final of the season for the top-ranked Djokovic, who began the year by winning the Australian Open.

A victory today will give Djokovic his 33rd Masters 1000 title, tying Nadal for most all time.

Djokovic, who won in Madrid in 2011 and 2016, had played only four sets in the Spanish capital this week ahead of the semi-finals. He didn’t play his quarter-final match because Marin Cilic withdrew with food poisoning.

The fifth-seeded Thiem, who beat Roger Federer in the quarter-finals, had won two straight against Djokovic and was trying to make his third straight Madrid final following losses to Nadal in 2017 and Alexander Zverev in 2018. The Austrian was also attempting to become the first player to win three titles this season, adding to triumphs in Indian Wells and Barcelona.