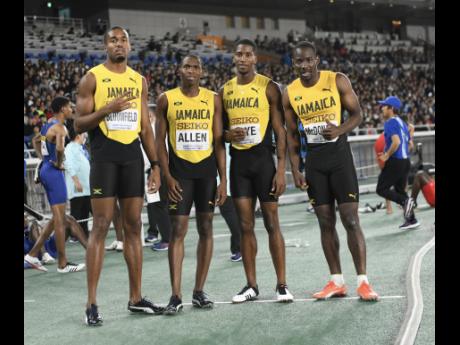 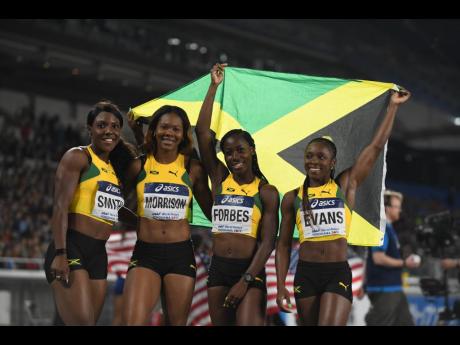 After squeezing into the final as one of the fastest losers, Jamaica's women sprint relay team corrected their errors from day one, to produce an exceptional performance to win a silver medal on the final day of the 2019 IAAF World Relays in front of 21,000 people in the Yokohama International Stadium, in Yokohama, Japan.

It was a high point for the Jamaicans, who ended the relay carnival in second place on the points table with 27 points (two silver medals and a bronze), the same as the hosts, with the USA again taking top honours with 54 points. The Jamaicans have finished second at each of the four staging of the IAAF World Relays but this year's total is their lowest ever at the championships.

In the women's 4x100m, running from lane seven, the team of Gayon Evans, Natasha Morrison, Shashalee Forbes and Jonielle Smith put together some fantastic baton exchanges to register 43.29 seconds.

Smith, who got the baton in third, reeled in the field and only lost the race to the USA by 200th of a second.

“From start to finish everyone did well. The last exchange could have been better but we finished healthy and with a silver medal,” Smith said after the race. “When I got the baton I just said that I had to do whatever it takes to get the job done.”

Their male counterparts could only manage sixth with 38.88 seconds, as Brazil grabbed the gold medal in 38.05 ahead of the USA’s 38.07.

There were high expectations for the women's 4x200m team. Having won the event in a meet record of 1:29.04 two years ago, the team was expected to go even faster with the addition of two-time 100m champion Shelly-Ann Fraser- Pryce and Stephenie-Ann McPherson to ace quarter-miler Shericka Jackson and Olympic sprint double champion Elaine Thompson, who were both on that team that impressed in Nassau.

But poor baton exchanges on the first and last changes took them out of medal contention.

They were awarded the bronze medal after the United States, who crossed the line in third position were disqualified for lane violation.

"Our baton exchanges weren’t up to standard and for that we are disappointed but we came out and we gave a sincere effort,” Fraser-Pryce said. “It is unfortunate that the USA got disqualified and I guess we are grateful for the third.”

Though it was evident that they still have work to do, the men's 4x400m relay team showed their potential by winning the country's first medal.

They crossed the line in third position but was moved up to second after the USA were disqualified for a lane infringement.

"We got a season’s best and we are happy with that. It is still early season and we are not anywhere near peak fitness as yet, so we still need to get things right and come again," said Bloomfield, who ran the second leg.

But it was the women's 4x400m team, that seemed set to win Jamaica's first medal of the meet, after Tiffany James, like she did in the preliminary round, ran a monster leg to put the team in front.

But poor timing from Anchor runner Janieve Russell proved detrimental, as she faded on the home straight away and was beaten into fifth with a time of 3:28.30.

"I am disappointed with my run. I think I didn’t execute as well as I thought I could to make my team get a medal, but I am glad that I finished the race injury-free," Russell said.

The men’s 4x200m team of Chadic Hinds, Nigel Ellis, Oshane Bailey and Jhevaughn Minzie were disqualified in the preliminary round after crossing the fourth.