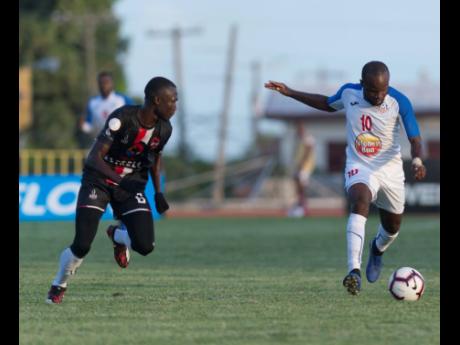 Portmore coach Shavar Thomas was pleased with the result and with how his team managed the Haitians throughout the match.

“It’s important that we started on the front foot, one as important as this one,” he said. “We made it hard for them. They are a good side, but we presented problems for them with our team shape and nullified what they brought to us. But we could have been more clinical in front of goal,” he told The Gleaner.

The hosts jumped into an early lead just two minutes into the game when an attempted clearance deflected off a Real Hope defender and fell kindly for East, who made no mistake.

Portmore then controlled possession of the game and kept the Haitians quiet for most parts. However, the visitors came into their own towards the latter stages of the half, and Schneider Desamours came close from two headers in the 36th and 38th minutes.

Moments later, Bernard Saintelys struck a shot from the edge of the area that just went over as Real Hope ended the period looking more confident.

After the break, Desamours had a great chance to get the equaliser, but Rosario Harriott’s alert defending deflected his shot for a corner.

In the 65th minute, East should have extended Portmore’s advantage, but he kicked over from inside the box. But Portmore regained control of the midfield soon after and only failed to add to their score because of faulty shooting after creating a number of openings inside the box.

Real Hope technical director, Gener Pierre, said they started poorly but believed they got better as the game went on. However, he said that all is not lost and that they will look to get back in contention with their next game against Waterhouse tomorrow.

“The way we started was not very good,” he said. “[Them] scoring [early] wasn’t good for us, but we can do better. We need to correct some things so we can do better, and the next two games, we can come back.”