Saratoga out of sight in feature win 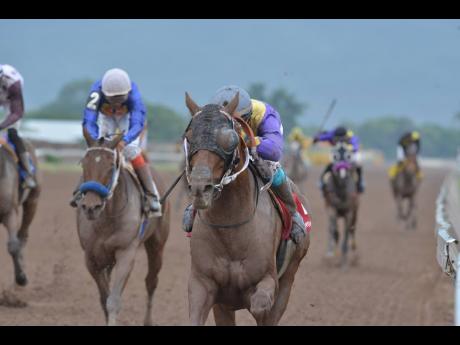 GARY Subratie’s one-eyed SARATOGA SIGHT missed the break but recovered down the backstretch to go in chase of stablemate UNCLE VINNIE, sprinting clear off the turn, before turning back a challenge from BRUCE WAYNE to win the Reynold Gonzalves Memorial Cup by three lengths.

ARMAGEDDON was a 6-1 upset winner of the Labour Day Trophy, running strongly on the faster stands’ side to win by two and a quarter lengths from 25-1 longshot, NIGHT LIGHT, and 4-1 chance, TALENTED TONY K, while 1-9 favourite, CUSTER, was hard ridden to claim fourth place in the five-furlong straight opening event.

Ellis pushed CODE OF HONOUR to the lead three furlongs out, galloping past ROY ROGERS, to land the third at odds of 9-1 for trainer Michael Marlowe. He returned aboard 2-1 chance, KING TAVARI, to turn back Omar Walker astride CELEBRATION in the sixth.

KALAHARI in the fifth

Leading trainer Anthony Nunes was denied a two-timer, posting KALAHARI in the fifth, but saw LATAPY’s number taken down in the eighth, the race awarded to second-past-the-post SURE COTE, after jockey Aaron Chatrie took CASE CLOSED’s ground on the home turn.

Racing continues at Caymanas Park tomorrow with the 10-furlong Governor’s Cup for which Nunes’ 2000 Guineas winner, SUPREME SOUL, is the ante-post favourite.