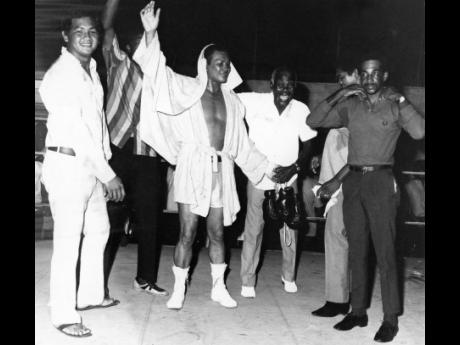 In this file photo from Saturday, October 16, 1971 Willie Yap (second left), then a featherweight boxer, raises an arm victoriously after his split decision win over Wendell Spence in a 10 round battle at the Dragon Gym in Kingston. Yap passed away in London, England, on May 11.

Jamaica’s boxing fraternity is mourning the loss of another of its stalwarts. Willie Yap, who served as a member of the Jamaica Boxing Board for many years, and also assisted several boxers on their journey to stardom, died on Friday, May 17, at age 77, after suffering a heart attack. His death followed closely on that of another boxing personality and music producer, Castro Brown, who also died of a heart attack at age, 68, on May 11, in London.

Yap who was himself a boxer, had a brief career as both an amateur and a professional. He had only three professional fights, winning one and losing two, but made his mark as an administrator, trainer, matchmaker and mentor. He lived overseas for many years, and developed friendships all over the world with top boxers. He had a very close working relationship with former world champion Lloyd Honeyghan. He also worked ­periodically with another world champion Mike McCallum.

Recently he has been assisting several young boxers, and negotiated fights for them in Canada and the USA, with his daughter Caren Halliwell, who lives in the USA, and is a former Miss Jamaica UK. Halliwell has inherited her father’s love for boxing, and has been following in his footsteps as a boxing mentor and matchmaker. Their company, Dragonbay Boxing, is structured to assist young boxers, and she told The Gleaner that Dragonbay will continue his legacy and dedicate itself to nurturing young boxers, particularly Jamaican boxers.

She said that his death was a shock to her and the family, and that she was with him when he suffered the fatal heart attack. They were able to get medical assistance for him, she said, but unfortunately it was too late.

Yap is survived by his wife Alline, three daughters and a son. A funeral service for him will be held on Saturday, June 1 at St Benedict’s Church in Harbour View, St Andrew. He will be buried in his home town, Lamb’s River, in Westmoreland.